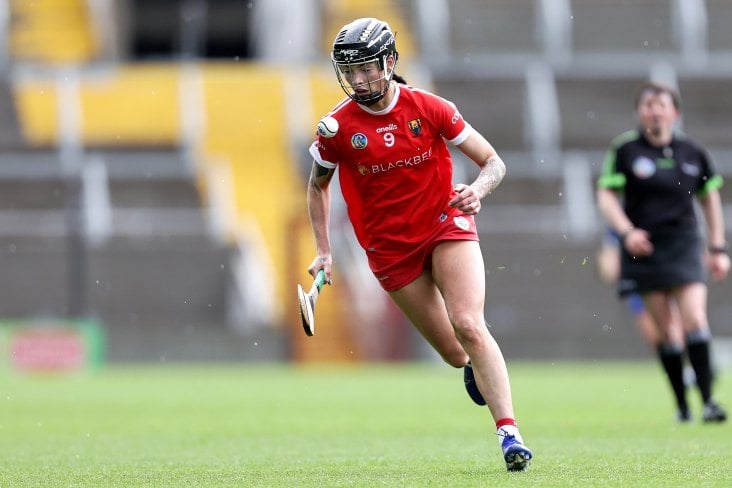 The mood was playful as coach Davy Fitzgerald dribbled some water down the back of Matthew Twomey’s neck while the manager gave his media debrief in the immediate aftermath of Cork’s 0-15 to 0-10 triumph over Waterford in Saturday’s Glen Dimplex All-Ireland senior camogie semi-final at Croke Park.

But everyone knew, not least the Rebels themselves, that they had extricated themselves from a very sticky situation, having played second fiddle to Waterford in the first half in particular when it took them 23 minutes to score and been blessed to trail just by four at the break, 0-7 to 0-3.

Though literally hamstrung, Abby Flynn was causing plenty of problems and she set up Róísín Kirwan for a glorious goal opportunity but the full-forward’s shot, under pressure from the advancing Cork skipper Amy Lee, flew just over the bar.

Beth Carton was exerting influence all over the pitch and her designated marker, Katie O’Mahony was withdrawn in the 22nd minute. Pocket rocket, Lorraine Bray continued her brilliant form at midfield too alongside Clara Griffin.

The Déise players, operating at this level for the first time, the county not having been in the last four since 1959, embraced the occasion and still led by three when Niamh Rockett pointed in the 46th minute. A first All-Ireland not comprising two of Galway, Kilkenny or Cork since 2012, when Wexford completed the three-in-a-row, was a real possibility.

Waterford couldn’t score again though, Carton shooting narrowly wide on a couple of occasions and Rockett being askew from a few more efforts.

With the spaces opening up, Cork shot eight points in a row, only hitting the front in the 56th minute through substitute Emma Murphy, who had already forced Brianna O’Regan into a stunning double save, and finishing with a very flattering margin of victory.

While Libby Coppinger, Méabh Cahalane and Saoirse McCarthy were big performers for Cork, it was Ashling Thompson who was the game’s most significant figure.

After winning an appeal against a two-match suspension in the morning, she was left on the bench initially but her introduction for O’Mahony began to turn the tide the Rebels’ way, as she moved seamlessly into the plus-one defender role, while Laura Treacy took up marking duties on Carton with a greater degree of success.

Thompson began delivering more forward-friendly ball than had hitherto been the case, finding space and a teammate so often.

And then, there was her physicality over the ball and in breaking out of tight contests. Twomey felt her contribution was worthy of considerable praise, and he was right, though he did not forget Waterford in his summation.

“Massive relief,” the Cork boss asserted in describing his primary emotion. “When you don’t score for so long, it’s hurling suicide. It was mad but you have to give massive credit to Waterford. We’d no answer for them. They brought a lot of energy but I suppose the overriding thing to come away from it is we’re very happy with the character of the team and the way we finished the game.

“At the start of the second half we ended up being five points down and to turn that around, you have to be happy with it. Semi-finals are there for winning. I know it’s an old cliché but it’s a fact. We have to have a serious, serious look at ourselves now before we play one (the final).

“When Ashling Thompson came on, we did settle that good bit. Her first possession, she gave a ball down the wing for (Katrina) Mackey to get her first score. She’s that kind of a player, she’s immense and we missed her when she wasn’t starting.

“When you’re down Orla Cronin, Pamela Mackey, Linda Collins from last year, to lose Ashling then (was a blow).

“At lunchtime yesterday, we got notice that the (appeal) meeting was (Saturday) morning at half-past ten. Obviously, we’d a lot of work to do to get this thing over the line. She had to leave home at six o’clock in the morning to go into that meeting. Didn’t know if she’d be togging out or not, up in the stand or out in the field. She’s different gravy altogether.”

Waterford manager, Derek Lyons was justifiably proud of his charges but was equally anxious not to emphasise the disappointment of losing.

“We gave Cork energy in the last seven or eight minutes, partly because girls were out on their feet at that stage. We carried a few injuries but that’s a testament to these girls, they were just immense and I’m so proud of them.

“They’ll be disappointed for days and weeks and maybe months but I said to them, all they can do is their best when they go out on the field and that’s what they did today and the county should be so proud on them.

“But we didn’t get it done. I keep talking about moral victories, and we’re great in Waterford to do that, men and women, so we need to move beyond that, and say, this is not about us making a spectacle for people to admire here today.

“Now that is important as well because it raises the profile of camogie in Waterford for young girls here and watching at home wanting to be the next Beth Carton, the next Lorraine Bray or the next Niamh Rockett and the girls carry that responsibility on their shoulders as well as trying to win a game, which is immense.

“We have to get a little stronger, to be better. We won’t beat Cork next year unless we’re better. But I do think the few knocks we were carrying were key. Abby was immense. She wasn’t hearing anything about not playing and she was still so effective. They had to put one of their key players on her (Coppinger). That’s the respect that Cork showed to Abby and a few of our players.

“Yesteryear, that wouldn’t be the case. So there’s another statement there in that regard… there was a day when the Corks, Tipps and Kilkennys of this world maybe just had to mark one or two players. That’s not the case anymore. We’ve made huge strides in that regard so it’s just about tightening things up a bit and moving on a small bit more.”

Twomey gave the vanquished Waterford and Lyons a ringing endorsement.

“In all fairness to Waterford, it’s their first time in 60-something years in a semi-final,” Twomey noted. “A lot of them players, it was a first time in Croke Park. When things start going against you, it’s very hard. You need experience to turn the tide. We had it, luckily. They just fell short but Derek Lyons is doing a fantastic job with them and I hope to God they come back again.”