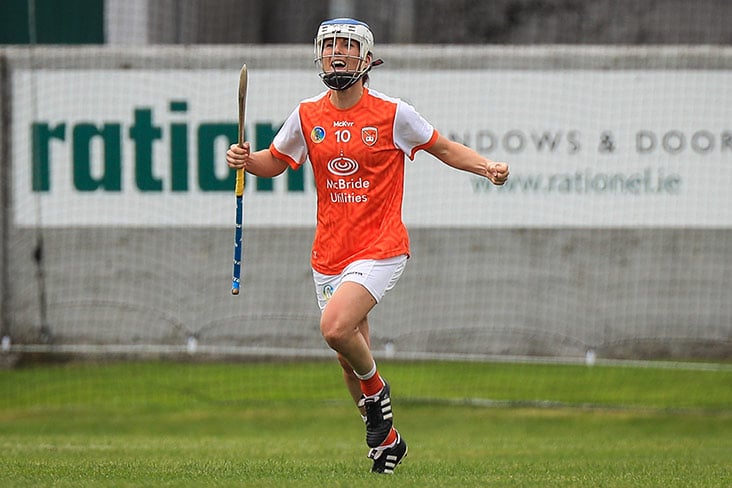 The Yummy Mummies WhatsApp group really lit up after the semi-final with messages of congratulations from friends who had shared the good, the bad and the ugly.

Briege Corkery, Orla Cotter, Síle Burns, Eimear O’Sullivan, Joanne O’Callaghan and Rena Buckley are just some of the legendary figures in the cabal that had all exited centre stage over the years, moving on with phase two of life.

Jenny Curry had done likewise but she is the odd one out now. After her early second-half goal in the 2014 All-Ireland senior final sparked a remarkable Cork comeback, she retired from the big stage with four triumphs at the highest level and eight All-Stars.

This was despite taking a couple of years out to travel to Australia and missing out as the Rebels completed two-in-a-row in 2008-09. She could easily have been doing the business in 2015, 2017 and 2018 too but she hadn’t really intended to play in 2014 as it was, having moved to Monaghan the previous year to take up a teaching post and begin married life in Middletown with her new husband Paul, who she met on that Aussie sojourn.

Yet here she is, two months short of her 39th birthday, preparing to run out onto Croke Park once more on Sunday, this time for her adopted Orchard County in the Glen Dimplex All-Ireland Premier Junior final against Antrim (12pm, live on RTÉ2).

What’s more, it is her second-half contribution of 1-3 that broke the Cavan resistance at Bord na Móna O’Connor Park last Saturday week. She’s still got it, no doubt. Balance, skill, speed of movement and thought. Also, the predator’s killer instinct.

Check out the goal. There are just a little more than 13 minutes of regulation time remaining and Armagh trail by three points when a diagonal ball is played into the Cavan danger zone. Curry is at full-forward now and races towards the sliotar as it propels towards the endline, away from the goal with the Cavan cover closing in.

The lithe frame that is unchanged from eight years ago is first on the scene, just a few feet from that endline. She leans to the right and just places her hurley delicately in front of the ball to allow it roll onto the bas. Without any ostentatious movement, she has it in her hand..

Crucially, she is facing goalwards when she gathers possession. In a flash, she transfers her weight to the left and having sucked the nearest defender in, is able to make the necessary space and angle to deliver an unstoppable drive. Armagh never look back.

Whatever happens on Sunday, there will be plenty of cake in the Curry household, as Jenny’s son Tiernan will be celebrating his first birthday. He won’t know much about what’s going on but Lauren, who will be three in December, is very clued in.

“For the semi-final, she was at home and watched it on TV,” Curry regales. “Paul was saying when I got the goal, she actually stood up and was like, ‘Yay Mummy!’ And then, the full-back fouled me at one stage and she was giving out, ‘Don’t you hurt my mummy!’ So she’s very aware.

“Sometimes when I go to training, she doesn’t want me to go but when I come home, the next day (as Paul will have put her to bed before her mother is back), she’s like, ‘Did you enjoy your training?’ So it’s good for her to experience it as well.”

Having that opportunity to be a role model to her daughter is something Curry values highly.

“Myself growing up, seeing the people in my club, I was aspiring to reach their level. So Lauren being my daughter, that would be even more powerful. I suppose a big motivation for me would be to get that photograph with my two smallies and my husband, hopefully – hopefully – lifting that cup, for her to be able to look back on it and recall the day.”

She knows the challenge Antrim will provide. Only two points separated them in the group stages, and after that game, Antrim’s Brónach Magill introduced herself as the primary school student that had written a letter to her the guts of a decade earlier, because she was her idol. That was and is her status. Lauren has a readymade bona fide legend to look up to.

From that 2014 final, only Laura Treacy, Ashling Thompson and Katrina Mackey of Cork’s starting 15 will line out in the senior final. Joanne Casey, who came on for O’Leary in injury time, is leading scorer for the Leesiders’ intermediate contingent also chasing ultimate honours. On the Kilkenny side, Claire Phelan, Denise Gaule and Katie Power have survived, though Miriam Walsh was introduced and Emma Kavanagh and Leann Fennelly remain panellists.

Curry had moved north a year by then and was a Middletown player when that last All-Ireland was grasped, famously topping the squad’s bleep test charts despite doing a lot of work on her own as well as making regular 500-mile, eight-hour round trips to Cork to train.

“I remember when I first moved up here, I was starting a one-year contract in a school in Carrickmacross in Monaghan. I finished my last game with Barryroe on the Sunday and moved all my stuff up in the back of a van with Paul. We were moving into our house that very evening and then the next day, I was starting my new job. So it was all very quick and rushed, a rollercoaster of emotions as well.

“I was saying that myself this year, ‘If you can travel up and down and do that, surely you can travel 15 minutes to training a couple of times of week and play a few games. Anything is possible.”

It wouldn’t be possible without the support of Paul, family and friends. Indeed it was her husband “who planted the seed”.

“I don’t know do people think I’m wise or not but it’s exciting,” she says of her comeback. “It’s great to be back there. I had a decision to make at the beginning because Tiernan was six months or so when I got the call – he was actually younger than that. It was very hard. You’re playing with your emotions and the guilt overcomes you a little bit as well but I always had in the back of my head, there was something told me I should do it so I’m delighted now to be this far on and where I wanted to be.”

Her competitiveness is renowned, even on so-called fun runs, so Curry was never likely to lose her conditioning easily. She had always kept her fitness up, playing ladies football also with crack Monaghan club Emyvale (of McAnespie fame) until the family expansion called a halt to that commitment. Even while pregnant, she kept in shape and that has been a big help. The biggest challenge was getting the speed back and recovery takes longer but she has gotten to the point where she feels like she can go at full pelt for an hour now.

She had long been impressed by the talent in Armagh and had helped out on the training side of things for the Eglish team from Tyrone buttressed by Orchard great Ciara Donnelly and her sister Leanne when they were in All-Ireland club contention in recent years. She had created a big impression with the club, with the likes of this stunning goal in the 2015 championship (https://armaghgaa.net/camogie-news/jennys-incredible-goal-for-middletown/). With her sisters-in-law, Orlagh and Stephanie Curry involved and speaking highly of the set-up, she finally relented to the itch and aren’t Armagh glad?

It will be special for her dad, Joe to make the trip up again, having shared so many wonderful days with his late wife Kathleen following their daughter around the country. Kathleen passed away early in 2014 and Jenny’s sister, Paula died just a couple of weeks before Jenny burst through the Kilkenny defence to score the vital goal in that year’s All-Ireland final. That was only two months after Jenny and Paul got married.

Joe will have Jenny’s sisters Carol and Debra for company but the brothers, Michael, Damien, Joseph and Ryan will have to watch at home, as they are preparing for the All-Ireland coastal rowing championships the following week.

She will have other supporters too.

“The WhatsApp group has been buzzing and I’m delighted to see that they’re excited as well. And d’you know, it’s even more exciting with the Cork girls in the senior and intermediate as well. (Senior manager) Mattie Twomey would have been involved with us in 2014 as well. I’m delighted for them.

“It’ll be strange, I suppose, not to be wearing the red but at the same time, it’s brilliant to be able to wear the orange too.

“I can’t wait to drive into the stadium, like we used to, under the stands. Even the warm-up and things like that. And to step out on the pitch again. I’m excited. I know I’ll be nervous but that’s a normal experience for me. I’m gonna relish it.

“I know days like these don’t come around too often and I’m in a very lucky position to be able to do this again at my age. So I’m just gonna take every bit of it in and enjoy it with my new teammates.”