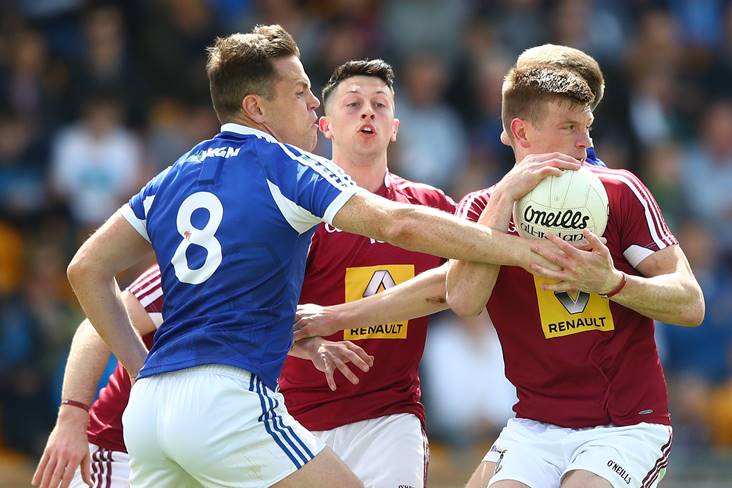 Westmeath returned to Allianz Football League action in winning fashion by brushing aside Laois this afternoon at Cusack Park.

Jack Cooney’s men were impressive over the 70 minutes in Mullingar and their victory sees them join Armagh and Roscommon (who play each other this evening) at the top of the Division 2 table on seven points.

Ironically, the Lake men struck the opening seven points of this contest, with John Heslin’s gem inside the first minute getting them up and running against their sluggish counterparts.

Kieran Martin, Heslin (free) and Ronan O’Toole made it a five-point game on 11 minutes before St Loman’s star Heslin sailed over another from all of 50 metres.

Lorcan Dolan’s 21-metre saw the Lake men keep their foot on the throttle prior to Mark Barry landing a hat-trick of sorely needed frees for Laois after the water break.

Heslin’s fifth point was cancelled out by a converted ‘50’ from Laois net-minder Niall Corbett in the 22nd minute and the hosts six-point lead would be restored once points from Heslin and Ray Connellan shot long distance scores.

Gary Walsh and Connellan traded points before Corbett pulled off a terrific save on James Dolan and Ronan O’Toole converted the rebound over the bar.

Had Dolan’s effort went in it would likely have been curtains for the O’Moore men, as they trailed instead by 0-12 to 0-5 at the half.

Diarmuid Whelan split the posts for the visitors early in the restart prior to a converted mark from Lorcan Dolan and it would stay at doubles scores after Corbett (free) was cancelled out by James Dolan on 46 minutes.

Laois couldn’t make the headway they needed as that man Heslin once again proved a thorn in their side, tapping over a 30-metre free to erase one at the other end from Daniel O’Reilly.

O’Toole’s solo effort had it at 0-16 to 0-8 a minute shy of the hour and when Jamie Ganoud cut through to hammer home a minute later the game was over as a contest.

In what was a brilliant move from the hosts, it was Luke Loughlin’s superb pass that tore open the O’Moore men’s defence and an unselfish offload from Loran Dolan to Ganoud reaped the three points.

Walsh swung over back-to-back points in response for Laois but scores from Heslin and debutant Brandon Kelly would round off the victory for Cooney’s charges.