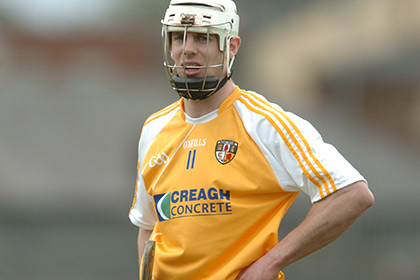 Antrim's Neil McManus
Antrim bounced back from a heavy defeat to Offaly last weekend to defeat the Faithful County by 1-18 to 1-14 to preserve their 1B status.

Offaly ran out comfortable victors when the sides met at O'Connor Park last Sunday, but as expected this match was going to be a lot closer and so it turned out.

Indeed, the Faithful County made a bright start to the match and they were 1-09 to 0-04 in front by the 29th minute, with Stephen Quirke scoring an early goal for the visitors. Quirke's goal came in the fifth minute after he collected a pass from Kevin Brady to fire to the back of the net.

It looked as if a repeat of last week could be on the cards, but Antrim hit form and scored 1-04 without reply to pull themselves back into the match. The goal coming from Conor Carson.

Throughout this period, Paul Shields proved an inspirational figure for the Saffrons and he drove them on as they only trailed by 1-11 to 1-08 at the break. Shields finished the match with nine points.

Joe Bergin was in good form also during the opening half and all of Offaly's forwards scored during that dominant opening quarter.

At the start of the second half, points from Shields, McManus and Carson had the sides' level and Antrim were growing in confidence with each passing minute.

The sides exchanged scores on more than one occasion over the next few minutes as the sides were level with 15 minutes left to play.

Then Antrim took control and they outscored their opponents by five points to one for the remainder of the game with O'Connell getting the last score of the game right at the end.

For Offaly, they now must prepare for a promotion/relegation play off against either Kerry or Carlow, while Antrim can focus on the start of the Leinster SHC and an opening round clash against Westmeath.