JFC: Wood pipped in battle of the Kilmainhams 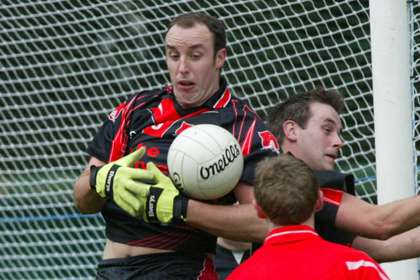 The 'Wood had two points on the scoreboard before Kilmainham got off the mark with Gerard Morgan and Mark Newman putting over two frees each. It was then that Kilmainham put a fine display of passing for Danny Butler to score a goal. The 'Wood scored the next two points from play to leave them all square then in the 19th minute. Danny Butler popped over another with Mark Newman finishing the first half with a free, leaving Kilmainham leading by a goal at half time.

Mark Newman starting off were he finished the first half with a free and then followed it with a point from play, putting Kilmainham five points in front. The 'Wood then hit back with three points before Davy Farnan scored a well earned point. Then it was point for point before Seanie Mahon got a crucial point in the 20th minute. Kilmainhamwood scored three points to cut the lead to one but Kilmainham dug in and defended doggedly and won by a point.

Those who played well for Kilmainham were Stephen Newman, Trevor Lynch, Gerard Morgan, Seanie Mahon and an exceptional display at midfield by Barry Lynch.