Kennedy named Handballer of the Year 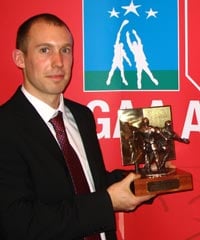 Eoin Kennedy
Eoin Kennedy's place as one of Handball's greatest exponents was further cemented when he was named the Vodafone GAA All Star Handball award winner for 2007. The award was presented by the President of the Irish Handball Council Tom Walsh at a reception in Dublin's Westbury Hotel attended by Kennedy?s family and friends. His domination of Handball's major prizes at home and abroad is further illustrated by the fact that this is the fourth time in seven years that Kennedy has been selected for the Vodafone award. It marks another extraordinary year in the career of the 28 year old star who plays out of the St Brigid's club in Blanchardstown as he continued to re-write the history books. He became only the third player in history to win the grand slam of 60x30 All-Ireland titles, joining the late John Ryan of Wexford (1957) and Walter O'Connor from Meath (1998) on that elite list. Once again he was joined in the doubles triumphs in both the softball and hardball championships by Egin Jensen from the Na Fianna club. Eoin's list of achievements is enormous. As well as domestic titles which he has collected in dozens, he has won World, United States and Canadian championships. He has led Ireland against the Basque Country under compromise rules and in 2007 was the catalyst to Ireland victory over the United States in the prestigious Casey/Lawlor Cup. Earlier this year he was the star attraction, along with top American Emmet Peixoto, in a series of exhibition games which took place in the Japanese cities of Tokyo and Yokohama. Paying tribute to Eoin, Irish Handball Council President Tom Walsh said; "On and off the court Eoin is a wonderful ambassador for Handball. He combines great skill with athleticism and I'm sure he will continue to set records that will create targets for future generations." Speaking at the ceremony, Vodafone Ireland Sponsorship Manager Brian Sheridan said, "As we at Vodafone Ireland embark on the eleventh year of sponsorship of Gaelic Games it is our great pleasure to complete the business of 2007 by honouring this outstanding handballer of the year." Tweet