"We learned a lot from last year" - Antrim skipper Carey 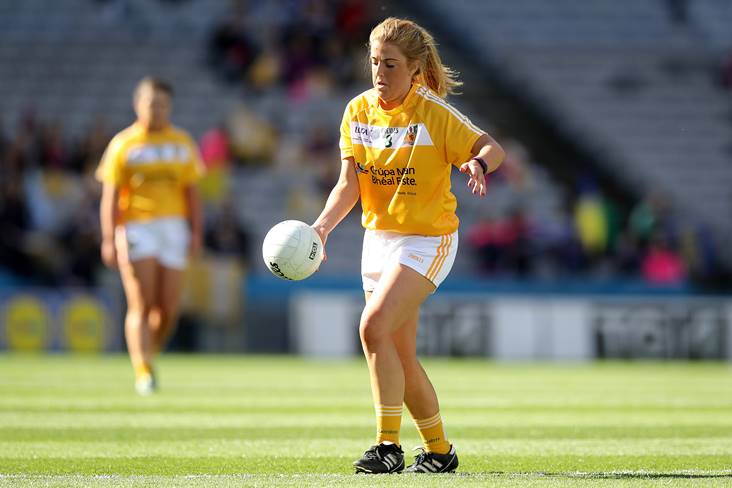 Antrim recently advanced to the TG4 All-Ireland Junior Championship semi-finals and found out last Sunday that they will face Carlow in the final four on Sunday July 10.

It will be a repeat of last year’s semi-final, where Antrim were victorious after extra-time, before a trip to Croke Park for All-Ireland final day.

Antrim were the only Ulster outfit on the Jones’ Road that day but four counties from the province are still alive across the three championships this year.

And the 32-year-old says she notices an increase in the growth of the game especially at underage level in places like Antrim.

“There are a lot more clubs getting involved from the ground up, so from your U-8 and U-10, you can see those teams coming through and maybe entering an U-14 league for the first time and an U-16 league,” said Carey.

“It’s definitely in a better place than it has been over the years. There is still a way to go but there is definitely bigger numbers. Loads came out to the trials and stuff which is great to see, numbers to compare with other counties. It’s good that girls are keen to get involved.

“What Armagh have done with the home ground pitch, the central training ground and stuff is class. That’s something I think every county would love. And it just brings everybody, all of the county squads and all together.

Carey is a ZuCar #Gaelic4Teens programme ambassador this year and is excited about the future for Antrim Ladies football.

However, the Moneyglass native knows the importance of the success of the current Antrim junior team, and that they will find it difficult to replicate the 3-22 to 3-18 victory over Carlow last year.

“It just makes it a wee bit more visible, I suppose. The county can see that the Ladies team are working hard and it’s something for girls to look up to,” said Carey.

“We learned a lot from last year, we have got that experience now, everybody knows what to expect. And as soon as we found out on Sunday, it was get the head down and focus on that game for the next couple of weeks.

“We played Carlow twice last year and whatever way it worked out we ended up in extra-time, both were really, really tight affairs. One of those games where whoever won it deserved it, and whoever lost it was hard done by.

“We are expecting much of the same thing, a really tight game. The top four teams, there is very little separating them.”

Cathy Carey was speaking at Croke Park today as ZuCar, the LGFA's Performance Partner and Gaelic4Teens sponsors, were unveiled as title sponsors of the All-Ireland Ladies Minor Football Championships. Cathy is a current ZuCar Gaelic4Teens ambassador.