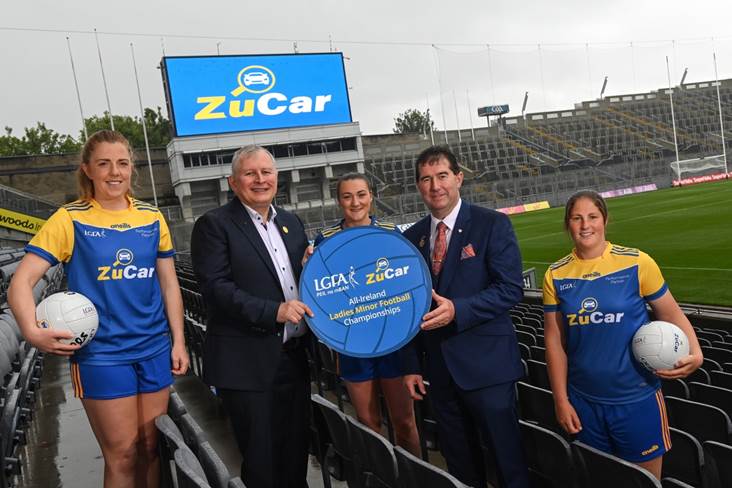 The Ladies Gaelic Football Association is delighted to confirm ZuCar as the new title sponsors of the All-Ireland Ladies Minor Football Championships.

In July 2021, ZuCar were unveiled as the LGFA’s new and official performance partner, and sponsors of the Gaelic4Teens development programme.

The LGFA’s partnership with ZuCar has now been extended to include sponsorship of the All-Ireland Minor Championships.

The semi-finals in the A, B and C grades are fixed for Wednesday, July 20, and the Finals will be played on Wednesday, August 3.

LGFA President Mícheál Naughton was present at Croke Park for today’s announcement, and he was joined by Gavin Hydes, ZuCar CEO.

Niamh is a former Dublin minor star while Cathy and Jackie are both ZuCar Gaelic4Teens programme ambassadors.

Niamh and Dublin are preparing for a TG4 All-Ireland Senior Championship quarter-final against Donegal on Saturday, July 9, while Cathy and Antrim will pit their wits against Carlow in the Junior Championship semi-final on Sunday, July 10.

Ladies Gaelic Football Association President Mícheál Naughton commented: “We are delighted to extend our wonderful partnership with ZuCar, and to announce them today as the new and official sponsor of our All-Ireland Minor Championships.

“I wish to thank ZuCar most sincerely for their continued support and confirmation that they are the new sponsor of our All-Ireland Minor Championships elevates our partnership to new levels, and further strengthens it.

“At the minor grade, we are witnessing the exploits of many players who will go on to enjoy lengthy and glittering careers for their clubs and counties. With the return of our All-Ireland Minor Championships for the first time since 2019, the presence of ZuCar alongside the LGFA to drive awareness of this grade is a huge bonus.”