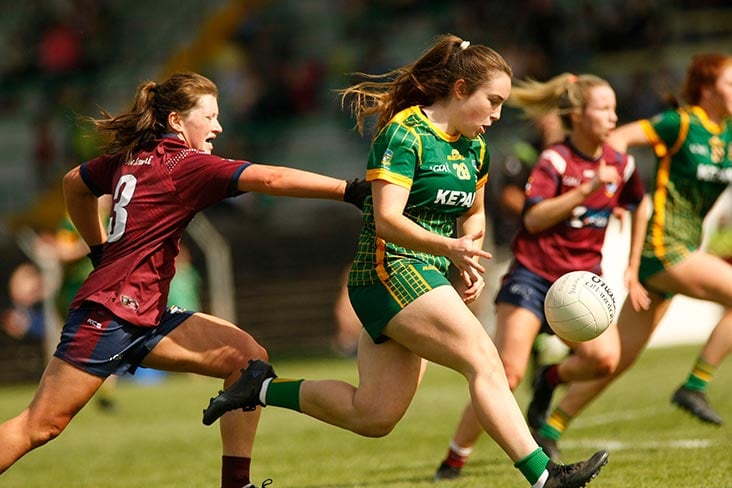 Stacey Grimes hit 1-7 as Meath set up a 2022 TG4 Leinster Senior Final clash against Dublin on May 28 with a comfortable win against Westmeath in Pairc Tailteann.

Meath were 1-7 to 0-2 to the good at half time and second half goals from Niamh Gallogly and substitute Ciara Smyth ensured the win for the reigning All Ireland Champions. Westmeath showed great resilience with Sarah Dillon hitting 1-5 of Michael Finneran squad's tally.

Westmeath got the best of the start, but Sarah Dillon’s effort fell into Monica McGuirk’s waiting arms and on the resumption, Kelsey Nesbitt grabbed the first score for the Royals in the second minute. Sarah Dillon levelled matters from a free a minute later but Vikki Wall’s first point from play nulled that score.

Stacey Grimes converted a free on seven minutes but Ciara Blundell brought Westmeath back to within a point after Kelley Boyce-Jordan overturned possession in the centre of the field and a quick exchange with Sarah Dillon sent Blundell through for her score.

Vikki Wall converted a free on 18 minutes and a minute later Meath found the net when Stacey Grimes converted a penalty after Kelsey Nesbitt was fouled. Meath finished the half strongly. Sarah Wall, making her return to Senior action since injury forced her off in the 2020 All Ireland Intermediate Final, hit a beautiful point off her left boot to push Meath into a 1-5 to 0-2 lead.

A Stacey Grimes brace, one from play and one a free summed up the action in the first half as Meath led by 1-7 to 0-2 at the break.

Orlagh Lally hit Meath’s opening score in the second half and Meath pushed further ahead when Niamh Gallogly hit Meath’s second goal on 35 minutes. Maire O’Shaughnessy found Gallogly and while the initial shot was saved by Westmeath keeper Aoife O’Donnell, Gallogly was first to the ball and she made no mistake the second time around.

Bridgetta Lynch pointed before a two Sarah Dillon frees reduced the deficit. However, Meath upped the gears and 1-5 unanswered in a ten minute spell ensured victory for the Royals. Grimes was central to that, hitting three points; two of which were frees before substitute Ciara Smyth made an immediate impact hitting 1-2 in quick succession.

To their credit, Westmeath continued to chase their opposition and Sarah Dillon pointed once more from play before converting a 55th minute penalty. Grimes and Dillon did swap scores from frees once more, but Meath had done enough to seal a Leinster Final date with Dublin on May 28th.