"It would be unbelievable to win this" - McGinn 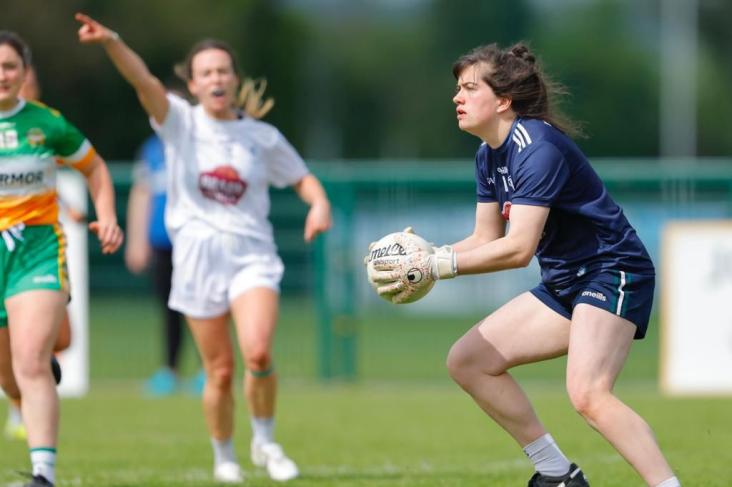 The first exam is on Tuesday, when the Social Psychology module focuses on the environment and how stimulus in your environment affects your behaviour and mood.

It’s a busy week for Dervla McGinn but the Kildare goalkeeper will look to claim her first piece of silverware with the county’s Intermediates tomorrow, before she focuses on her studies again.

Luckily, learning about Psychology through Science ensures she is always able to master her own mindset and stay on top of a busy schedule when her sport and college work collide.

Mindset has always been a key part of McGinn’s makeup and it even allowed her to transition from playing outfield to goalkeeper with Kildare a few years ago.

“The management that we had at the time, Daniel Moynihan and Nioclas Mac Donnacha, they just asked me. They were like, you have this attribute and this attribute that are perfect for playing in goals, would you give it a go? I was like, why not, it’s a challenge,” said McGinn.

“We had lost two of our goalkeepers, we were riddled with injuries on the goalkeeper front that year. So, I was like do you know what, I will. And I enjoyed it, I really liked it. The training was different, you had to approach it so differently to how an outfielder would but I just really enjoyed it.

“And then the following season came and Mary Hulgraine was back from taking a break and I felt I want to play outfield again. I played outfield for the subsequent season. Then last year I was approached again and asked if I would train as a goalkeeper and I did and I have been playing in goals since and I have been having a great time.

“I really love it, it’s been very different.”

The 22-year-old Rathcoffey native had safe hands, was good under a high ball and possessed an accurate kick-pass but one of the most challenging aspects of her new position stemmed from a skillset she had honed over the years.

“It’s not even one of those skills that can be taught,” said McGinn.

“It’s more realising that if the ball hits the back of the net, you have to lift yourself back up again and take the next kick-out. It’s more the mental toughness and realising that what’s happened has happened, you need to move on, and kick the ball out and give a good kick-out and make sure your team can go up the far end and score.

“It was more that mental toughness than anything else.”

And luckily McGinn has mental toughness in spades, while her recent studies involved her taking a look at how others responded when they are faced with adversity.

McGinn is in her final year of her course at Maynooth University and for her thesis she investigated the impact of sport-related injury on psychological well-being.

“I have experienced a few injuries, I haven’t experienced anything too severe or too serious. “It was more from the sporting angle and being in that sports environment and seeing all these different women that had gone through something,” said McGinn.

“In particular, last year we had on the county team a few girls who tore their ACLs (Anterior Cruciate Ligament). It just struck me, they get injured and disappear for a few months. What are they doing for the few months during their rehab and what are they going through?

“I don’t think there is enough support out there for women when they experience these long-term injuries. I was taking it from an angle that I want to raise awareness about this. Is there something that we can do to help these girls from a psychological well-being perspective?

“If they’re going through something, if they feel isolated, if their mental health is suffering because of this injury, if there is something we can do on a larger scale to help them. I was taking it from that perspective.

“I was thinking if I do a post-grad, maybe my post-grad thesis would be something along those lines to further expand on what I’ve found already.”

But even after a few years exploring the inner confines of human psychology, McGinn knows she is still someway off the finished article. She isn’t qualified to deliver psychological insights to her teammates just yet.

“After an undergrad you wouldn’t be qualified in anything like that,” said McGinn.

“I wouldn’t feel qualified enough to help them from that kind of perspective. But if someone was nervous before a game or any of that kind of stuff, if they ask, it’s important to tell them to focus on their breathing, their visualisation.”

And tomorrow Kildare will be looking to finally channel their winning mindset again when they clash with Wexford in the TG4 Leinster Intermediate Championship Final.

It has been a long journey getting back to the showpiece event, while Kildare haven’t experienced a real tangible success since their brilliant All-Ireland Intermediate win in 2016.

“It’s sad when you have to fill out the honours question when it comes to finals and everything. I actually haven’t won anything since U-16,” said McGinn.

“It would be unbelievable to win this. The past two years we have really been knocking on the door for some form of silverware. We know that we have been working hard.

“But it would be a reward. It would mean the world to all of us, all of the girls and all of the management team, it would really push us on and give us that momentum for the All-Ireland championship as well which I think we really need.”

And even if she does get across the line with her teammates for a momentous victory, there will be little time to celebrate before college gets in the way all over again. It’s been a long week.

“I would be a relatively organised person. Once I have my plan out for the week and I know what I’m doing each day, I feel quite calm,” said McGinn.

“It’s definitely a big week but I am feeling confident, I am not feeling cocky. One of my managers taught me you should always be confident and borderline cocky.

“I think that’s what’s very important going into any big game. Be a bit nervous but focus on your confidence. You’ve gotten there, your team deserves to be there.”