Passing of a Limerick Hurling Great 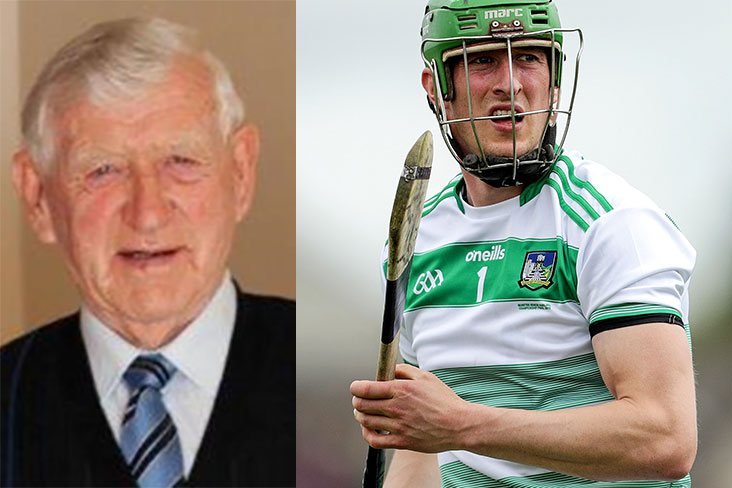 The late Jack Quaid and his grandson Nickie.

Jack, along with his twin brother Jim,  was a vital part of the fine Shannonside team of the mid 1950's.

From the Feohanagh - Castlemahon club, both starred as London were overcome in the 1954 All Ireland junior decider.

Promotion to the senior side followed and the twins were heavily involved as Limerick surprised Clare in the 1954 Munster decider. Jack lined out at left half back with Jim in the middle of the field.

This team were labelled the Mackey Greyhounds after their legendary trainer Mick Mackey. Clare had surprised reigning All Ireland kingpins, Cork, in the opening round and were warm favourites.

But Limerick strolled to a 2-15 over 2-6 success. Unfortunately that years eventual winners, Wexford, proved stronger in the semi finals. Amazingly that provincial success was Limerick's first in 15 years and they had to wait until glorious 73 before Liam McCarthy arrived back in the Treaty City.

Limerick did reach the final again in 56 and appeared set for a famous win. But Christy Ring was still hurling strongly at this stage and The 'Greatest Ever' struck for 3-1 in the games dying stages, knocking on the head any Limerick aspirations of a two in a row.

Interestingly, Jack and Jim, at 89 years of age were Irelands oldest living twins. A cousin, Seamus also lined out in the green of Limerick and while serving in the county as a Garda was at left half forward on the Wexford All Ireland winning team of 1960.

And that Quaid hurling legacy continues right up to the present day. Jack's son, Tommy manned the Limerick posts from 1976 until 1993 and gained two provincial mefals in 1980 and 81.

He was a regular Munster Railway Cup keeper from 1979 till 92 and entered the winners enclosure on 4 occasions. Tommy was also a coveted Poc Fada champion  He was killed in a tragic accident in 1998 as was the afore mentioned Seamus while in the line of duty as a Garda Detective in 1980.

And following in Tommy's immediate footsteps between the Limerick post's was his first cousin and Jim's son, Joe.

Joe was to go on and claim a duo of All Star awards, appear in the All Ireland deciders of 1994 and 96, gain 3 Railway Cup medals and in later years has managed on the inter county scene.

Some GAA dynasty, some legacy.

Jack's funeral details are as follows

For those who would like to pay their respects, the funeral cortege will depart from Jack's residence at 1.30pm on Wednesday 24th February, via Coolyroe on route to Castlemahon Church for private family requiem Mass at 2pm, in accordance with government guidelines. Burial afterwards in the local cemetery.

Mass will be live streamed at: https://youtu.be/aOPmMDiJPV4

Messages of condolence can be offered by clicking here.