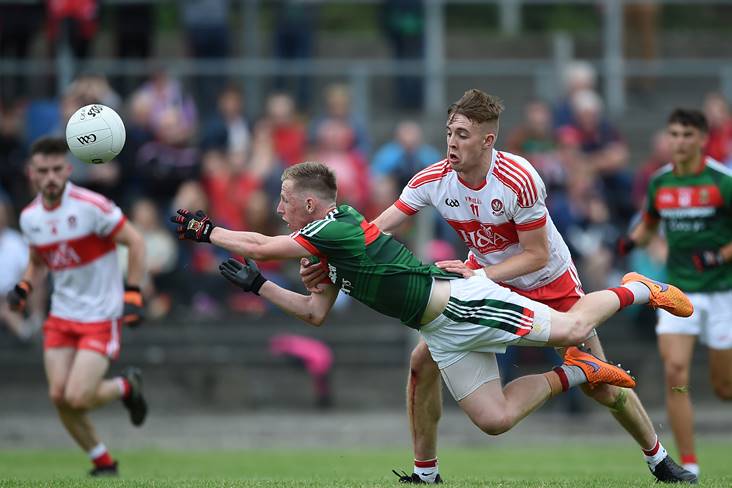 Mayo will contest the first ever All-Ireland U20 FC final after they got the better of Derry by three points in today's semi-final at Carrick-on-Shannon.

Mike Solan's charges edged out the Oak Leafers by 2-14 to 2-11 and they are now Croke Park bound on August 5th to face Kildare in the decider.

Captain Ryan O'Donoghue's early goal helped to settle the Connacht side's nerves and a closely contested first-half finished with them ahead by 1-7 to 2-3.

There was little to separate the sides throughout the second-half and Derry took over in the lead thanks to a Mark McGrogan point.

Moments later, in the 40th minute, half-back Paul Lambert pounced for Mayo's second goal and they could afford the luxury of spuring a penalty that was earned by O'Donoghue.

Derry 'keeper Oran Hartin came to his side's rescue when saving the spot-kick which was taken by O'Donoghue in the 53rd minute and the game very much in the melting pot entering stoppage time.

Full-forward Ross Egan top scored for the winners with 0-5 (all frees) while Lorcan McWilliams sent over 0-4 (3 frees) for the losing outfit.