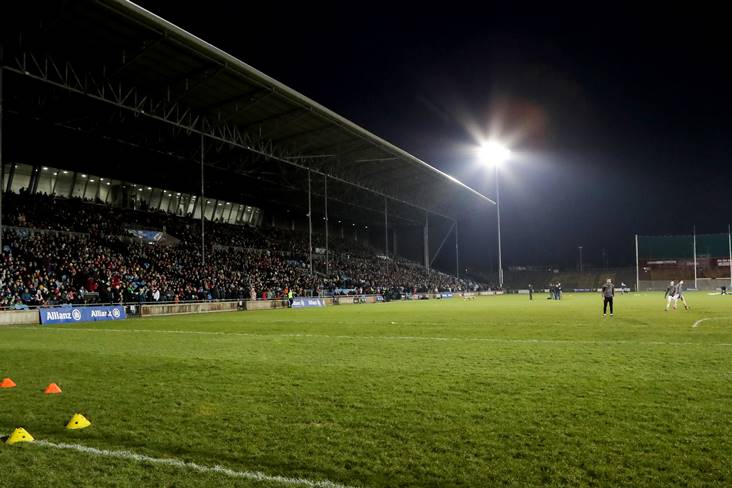 The floodlights are switched on at Elverys MacHale Park.
#©INPHO/Laszlo Geczo.

Mayo kick-started their inaugural U17 championship campaign with a 4-20 to 1-8 drubbing of Leitrim at Castlebar tonight.

Goals from Enda Hession and Fionnan Ryan - each of whom netted in both halves - fired Tomas Morley's impressive charges into an unassailable 2-8 to 0-4 half-time lead.

The hosts could not have asked for a better start to the game as captain Hession calmly dispatched a sixth-minute penalty to give tham a 1-4 to no score advantage. Garrymore clubman Hession had also slotted over Mayo's first three points, with wing back Conor Dunleavy tacking on the fourth.

Leitrim briefly made a fight of it, closing within the goal, but an excellent Lee Traynor strike made it double scores before full forward Ryan from Belmullet effectively settled the issue as a contest with the winners' second major five minutes from the short whistle - 2-5 to 0-4.

Traynor grabbed his second of the night and Ryan added a point before Hession closed the first-half scoring to leave ten between the sides at the interval.

The game started ten minutes late due to the dramatic curtain-raiser between Mayo and Roscommon in the JFC running over slightly and it was already past nine bells by the time Ryan popped up with his second (and Mayo's third major) to make it 3-11 to 1-6 after 37 minutes, with Leitrim - to their credit - still refusing to give up.

In the end, they had no choice in the face of a merciless Mayo onslaught...

The winners - whose next outing is a Round Two trip to Roscommon on Friday week - were never going to be troubled from there and Hession's 58th-minute goal provided the icing on the cake.

All in all, it was a Wednesday night to remember for Mayo at MacHale Park, where they romped to a superb 21-point success in the main event after nicking the curtain-raiser by the narrowest of margins. Two different ways to win; both equally pleasing for the victors!