Extra, extra time - read all about it! 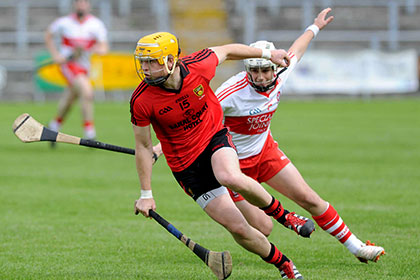 Down and Derry must meet again for a place in the Ulster SHC decider.
Is it within the laws of the GAA to play two periods of extra time at the end of a senior intercounty championship match?

That's what players, officials and fans were asking themselves leaving Clones on Sunday afternoon having watched Derry and Down finish all-square in their Ulster SHC semi-final meeting ... not once, not twice but three times!

The teams were actually also level at half time in normal time, Derry 2-6 Down 1-9, before Ruairi Convery's late, late point for the Oak Leafers made it 4-13 to 3-16 at the end of the regulation 70 minutes.

Twenty minutes of extra time were added and the sides were still deadlocked after 90 minutes - 4-20 to 3-23.

Following discussions between both camps, it was agreed to play another 2 x 5-minute periods of stoppage time to determine who would progress to meet Antrim but, predictably, it finished 5-22 to 3-28. A quick consultation with the calculator confirmed that this was still a draw!

The replay has been scheduled for Saturday but has a new precedent been set here in terms of sorting out drawn games? Can teams and match officials take it upon themselves to keep playing? Tweet