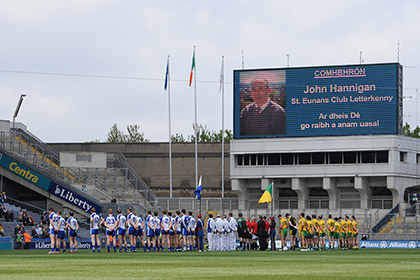 Players and officials from both teams stand for a minutes' silence in memory of John Hannigan from St Eunan's Club Letterkenny. INPHO
A moment's silence was observed before today's Allianz Football League Division 2 final for former Donegal footballer and manager John Hannigan.

The St. Eunan's clubman died on Wednesday after a short illness in Dublin's St. James' Hospital. Aged 75, he is survived by his wife Claire, son Damien, daughter Adrienne and extended family.

Regarded as one of the best players ever to emerge from Donegal, John played for 16 consecutive seasons from 1958 to '73, winning an Ulster SFC medal in '72. He is one of handful of Donegal men to have represented the county at senior level over 100 times, with 27 of his 114 appearances coming in the championship.

He first came to prominence as a corner forward on the Donegal team that won the county's first Ulster MFC in 1956 and subsequently scooped three McKenna Cup medals as well as five Donegal SFC medals with his beloved St. Eunan's.