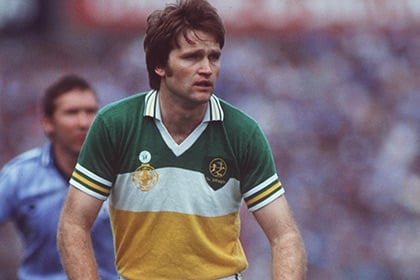 The Walsh Island clubman was full back on the Faithful County side that captured the All-Ireland SFC in 1982, famously denying Kerry the five-in-a-row.

A tall, strong footballer who stood at 6'3", Connor represented Offaly between 1979 and '86 (wearing the No.3 shirt in every championship match during this period) and was part of a famous Walsh Island football dynasty. His brother Tomas starred at midfield on the 1982 side and cousins Richie and Matt Connor were also members of that all-conquering XV. Another brother, Murt, won All-Irelands with Offaly in 1971 and '72.

Liam Connor was the All Star full back in '82 and also won three Leinster championships with Offaly as well as six Offaly SFCs and two Leinster club crowns with Walsh Island.

Liam, who passed away in Waterford last night at the age of 58, was also a brother-in-law of Offaly's 1982 team manager, Eugene McGee, and an uncle of current Kildare footballer Tomas O'Connor.

He delivered the pass for Seamus Darby's late clinching goal in that dramatic All-Ireland decider - possibly the most famous goal in GAA history.

Removal to the Church of the Assumption, Aglish is at 7pm on Wednesday evening. Funeral mass will take place on Thursday at 11am followed by burial in the adjoining cemetery. Tweet