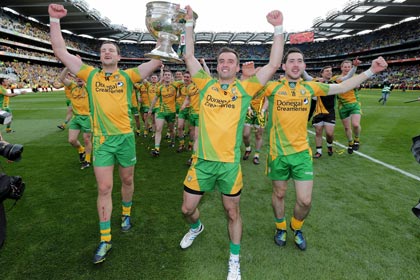 Donegal's Michael Murphy and Karl Lacey and Mark McHugh celebrate with the Sam Maguire INPHO
Karl Lacey is back in the Donegal line-up for Sunday's All-Ireland SFC quarter-final meeting with Mayo.

The 2012 Footballer of the Year was left out of the All-Ireland champions' starting fifteen that defeated Laois last Saturday in Carrick-on-Shannon but came on a substitute for Paddy McGrath in the second half. Malin clubman Declan Walsh drops to the bench.