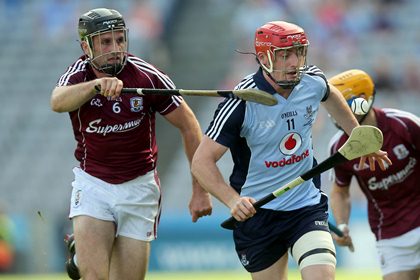 It was red-letter day for Dublin hurling in Croke Park today as Anthony Daly's side ended a 52-year wait for the Bob O'Keeffe Cup at the expense of holders Galway in the Leinster SHC decider.

An attendance of 36,657 witnessed history in the making as Clare All-Ireland winning captain Daly guided his charges to a 12 point success over the men from the west and they were treated to a wonderful advertisement for hurling.

At one stage it looked as though Dublin were going to coast to victory when they led by 11 points with half an hour to play but goals from Joe Canning and David Burke set up an exciting climax.

It was end to end stuff in the closing stages as Galway attempted to reel in their opponents but Dublin held firm and finished with a flourish to add gloss to a memorable victory.

Two goals, in either half, from full-forward Paul Ryan laid the foundations for the long overdue success and no one can begrudge Dublin their day in the sun following their replay exploits against Wexford and All-Ireland champions Kilkenny.

Joe Canning and David Burke found the back of the Dublin net during a hectic second half but the Johnny McCaffrey captained side managed to keep a safe distance between them and their opponents until the final whistle.

The warning signs were there for Galway when they stuttered to a last four victory over Laois and they were, once again, unusually off colour in the first half as Dublin set the early pace and raced into a 0-10 to 0-5 lead by the 20 minute mark.

The decisive moment of the opening period was Ryan's 24th minute goal which parachuted the team in sky blue into an eight-point lead.

Galway were very much in Dublin's rear view mirror and, despite the best efforts of Joe Canning, they were unable to overtake them in the remainder of the contest.

Canning opened the scoring in the 1st minute when sending over a free into the Canal End but Ryan (free) and Dotsy O'Callaghan replied for the team in sky blue.

It was tit-for-tat in the opening 10 minutes as Conor Cooney got the Tribesmen back on level terms.

The sides were level on 0-4 apiece after 12 minutes of play but the Dubs hit five points without reply to take pole position by the 19th minute.

James Regan and Johnny McCaffrey exchanged points before O'Callaghan set up Ryan for his goal in the 24th minute and the scoreboard read 1-10 to 0-5 in Dublin's favour.

A Ryan O'Dwyer point gave Dublin a nine-point cushion and it was all one-way traffic at this stage.

Canning gave Galway some respite with his second point from play and another free either side of a white flag from Dublin captain McCaffrey.

Hawkeye intervened to over-rule the umpires on the stroke of half-time after they incorrectly awarded a point to Canning and Galway found themselves 0-7 to 1-12 in arrears at the break.

Anthony Cunningham rung the changes during the break with Damien Hayes coming in for Cyril Donnellan and Aidan Harte replacing Iarla Tannian.

A quick brace by talisman Canning (free and from play) cut the gap to seven points shortly after the restart but normal service was soon restored when Ryan brought his personal tally to 1-4 in the 39th minute.

Ryan then landed a monster free kick from his own 65m line as Dublin continued where they left off in the first half and Hill 16, normally more associated with the Dublin footballers, reverberated with joy when the full-forward struck for his second goal.

Goal number two arrived for Ryan in the 40th minute after he was alert to a mis-hit shot from Conal Keaney before unleashing an unstoppable shot past Galway netminder James Skehill.

At that point it appeared as though there was no way back for the Tribesmen who trailed by 2-14 to 0-9.

Canning's 50th minute goal gave the Connacht side some hope but Ryan O'Dwyer calmed Dublin nerves when hitting his third point of the game in the 51st minute.

The momentum swung back in Galway's favour when David Burke netted from 22m out with a bullet and the game was back in the melting pot.

It was end to end stuff in a dramatic conclusion as James Skehill and Gary Maguire both pulled off point blank saves but it would have been a travesty if Dublin had let this glorious opportunity slip.

As events transpired, the metropolitans displayed tremendous character by rattling off five unanswered points to ensure they got their hands on the silverware for the first time since 1961.