Down too strong for Royals 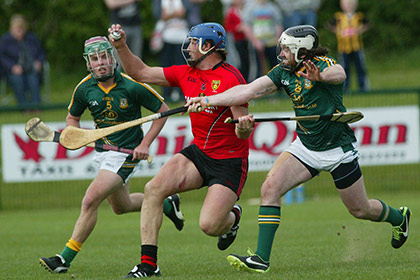 Down were firmly on top as they booked a Christy Ring Cup Final date against Kerry next Saturday, following a strong second half display at Ballycran in this afternoon's replay.

Down were firmly dominant and despite hitting 17th wides, including nine in the opening half, they booked a place in their first decider since 2009.

Paul Braniff fired eight points for the hosts in a game which Down took total control in the third quarter.

Meath finished this game with 13 men, with defenders Cormac Reilly and Sean Heavey sent to the line on a second yellow cards in the closing minutes.

Down were also numerically reduced late on with full-back Paudie Flynn shown a straight red card in the closing stages.

Meath opened this game brightly with a Mark O'Sullivan point, but Down took control with scores from Braniff and Danny Toner.

Meath regained the lead thanks to the only goal of the opening half - a Mark O'Sullivan effort after eight minutes, after the Kiltale clubman cut inside and smashed the ball past Down keeper Stephen Keith.

Little separated the sides for the remainder of the opening quarter, with a superb score from midfielder Ciaran Coulter levelling the tie at 0-6 to 1-3 after 16 minutes.

Down rued six wides at this stage, with Meath moving ahead once again.

Meath's top-scorer with 15 points in the drawn encounter last weekend, Stephen Clynch had been quiet early on, but added back-to-back scores to ensure a 1-5 to 0-7 lead for the visitors with 11 minutes remaining in the opening half.

However, Down proved strongest in the closing stages of the half with four unanswered points between the 25th and 34th minutes.

Braniff, Fintan Conway and James Coyle on target to open up a three-point lead, with Clynch and Braniff trading scores before the break to ensure a 0-12 to 1-6 interval score-line.

Scores were at a premium in the third quarter, as defences got on top.

Eoin Marsh broke the scoring dead-lock for the visitors, but his point was quickly cancelled out by Braniff's sixth score.

The Down captain's effort kick-starting a magnificent spell by the hosts who went on to add six unanswered points.

Paul Sheehan with three spectacular points from play, with scores also from Braniff, Johnston and two excellent efforts from Kevin McGarry to ensure a 0-19 to 1-7 lead entering the final quarter.

Clynch added Meath's first score in 13 minutes with a much required effort, after Stephen Keith had denied O'Sullivan of his second goal.

Down looked likely winners at this stage, and although Meath battled hard, Gerard Monan's side had that extra edge as they finished strongly.