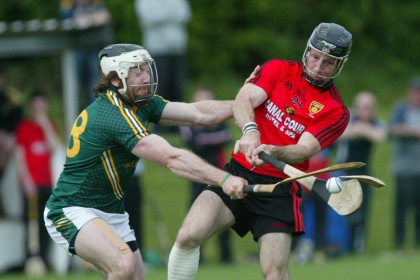 Stephen Clynch's 15th point of this thrilling Ring Cup semi-final earned Meath a draw with Down after extra time at Trim on Saturday.

The Kilmessan star completed the scoring following a foul on Adam Gannon and consigned Down to a Ring Cup semi-final replay for the second year running.

Meath's resilience was rewarded with prolonged interest in the second tier hurling championship. Once they curtailed in the influence of Paul Braniff (who scored 2-5) and Gareth Johnston they had the better of matters.

The introduction of Michael Burke into the Meath defence in the 29th minute also had a major bearing on the outcome with the Longwood man doing much to curtail the influence of Branniff and Johnston.

Goals from Braniff and Johnston boosted Down to a seven-point lead, 2-9 to 1-5, after 28 minutes. Without registering another goal Meath gradually whittled down the deficit, levelling matters for the only time in regulation time with a Clynch free in the first minute of stoppage time.

That left it 1-20 to 2-17 at the end of normal time. The scores were tied four times during the additional 20 minutes leaving the matter of who faces Kerry in the final to be decided at Newry in seven days time.

With the breeze at their backs Down got off to a bright start with Paul Braniff's fifth minute goal. When the Portaferry man landed a free from inside his own 65 the visitors were 1-3 to 0-2 to the good.

Daniel Toner raised three white flags in the opening half and the first of these moved Down five points clear shortly after.

Peter Durnin's close range goal was central to Meath's best spell in the first 35 minutes. It was followed by a Stephen Clynch free that left just the minimum between the teams 19 minutes in.

Down reasserted themselves and by the 27th minute were six points clear, 2-8 to 1-5, after Braniff netted his second goal. Things got even better for Down when Ciaran Coulter sent over.

Meath got the gap down to four points again after Adam Gannon and Durnin pointed. Coulter had the last score of the half. Down had the ball in the Meath net in the last action of the half but Scott Nicholson's effort from distance was ruled out for a foul on Royals 'keeper Shane McGann.

Down led by 2-11 to 1-9 at the first interval. Within ten seconds of the restart, Stephen Morris pulled a point back for Meath. The visitors - whose forwards are coached by former Waterford star Paul Flynn - almost got in for a third goal in the 44th minute.

Meath 'keeper Shane McGann diverted Johnston's effort for a 65. Down sub Paul Sheehan pointed from a tight angle moments later to leave five between the sides.

Four points in as many minutes saw Meath cut the deficit to the minimum heading into the final quarter. Cillian Farrell's men found it difficult to make up the deficit.

When Morris' point attempt hit an upright, the sliotar broke to Durnin who hit low and wide from a low angle with about five minutes of regulation time remaining.

Braniff put a goal between the side with a pointed 67th minute free. It took three points on the spin from Clynch (two frees) and Durnin to leave the scores tied, 1-20 to 2-17, after normal time.

Meath had the benefit of the elements for the opening period of extra time. A Clynch effort from play put Meath in front for the first time since the same player opened the scoring four minutes in.

Gerard Monan's men appeared to have the initiative heading into the second-half of extra time. Within 45 seconds of the restart Conor Woods landed a free from about 30 metres to his own goal. Another Braniff free levelled matters.

Braniff and Johnston reasserted themselves with points from play but a brace of Clynch scores from frees kept Meath's Ring Cup hopes alive for another week.