My Sporting Life by Jimmy Deenihan 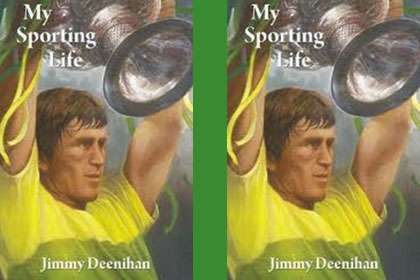 My Sporting Life by Jimmy Deenihan
The story of Kerry's footballing feats told by those gathered at the crossroads in Finuge filled the mind of a young Jimmy Deenihan with dreams of one day playing for Kerry in Croke Park and of maybe lifting the Sam Maguire Cup himself. In tandem with this dream grew a belief that sport is, as described by Hippocrates, 'the preserver of health'. My Sporting Life recounts how his dreams became a reality, culminating when he lifted the Sam Maguire as captain of the four-in-a-row winning Kerry team. Sport didn't end with retirement from competitive football. Jimmy describes his life as a P.E. teacher, coach and trainer of all age groups. When he entered political life, he embraced the concept of sport for the many and not just for the few, undertaking extensive examination of the role of sport in the lives of Irish people. He also details his organization of sporting events involving his Dáil colleagues and their counterparts in other countries. Jimmy's commitment to sport, not just as a participant at the highest level, but at all levels ands at all ages in life, is evident throughout My Sporting Life.

THE TIME the legendary Sam Maguire cup went missing in New York City, prompting FBI intervention, is recalled in a new book by Minister for the Arts Jimmy Deenihan.

My Sporting Life by the former Kerry footballer and multiple All-Ireland medal winner will be launched tonight.

In the book, published by Red Hen, he recounts a humorous tale from 1981 when he was asked to bring the Sam Maguire to New York to have it photographed with the Super Bowl trophy and the World Series baseball trophy.

"I felt that it was too much of a responsibility and was against bringing it," Mr Deenihan said, although he was eventually persuaded otherwise.

The cup was stored in a safe at Gaelic Park in the Bronx while the Feale Rangers team socialised. They lost a match to Tyrone's Ardboe the following day.

"After the match I went into the bar in Gaelic Park to collect the cup only to be told by the caretaker that it had been taken from the safe by someone unknown to him that morning."

Panic ensued, and only the intervention of an FBI officer helped recover the cup. "When I called to Gaelic Park the following morning at 11am, the Sam Maguire was in the bar wrapped in a black plastic refuse bag."

Mr Deenihan also remembers having his nose broken during a game by the Dublin half-back Pat O'Neill in a 1978 game in New York. Later that night, in Rosie O'Grady's Bar in downtown Manhattan, a message was passed to Mr Deenihan from Mr O'Neill.

The message was "that he was very sorry for striking me and that it was a case of mistaken identity; as visibility was bad, he had mistaken me for Páidí Ó Sé".

His nose soon healed "and I just forgot about the incident".

Launch:
Date: Sunday January 8th, 2012
Venue: Kerry Hall 305 McLean Avenue, Yonkers, NY 10705
Time: 5.00pm
All proceeds from the sale of the book will go to the Lartigue Monorail Project, Listowel, Co. Kerry
My Sporting Life is published by Red Hen Publishing and is available from book shops and online at [email protected]