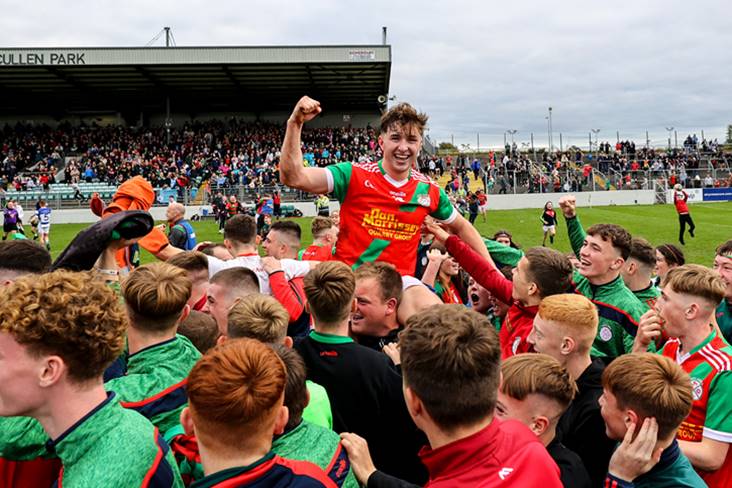 Palatine of Carlow earned their first-ever win in the Leinster club SFC as they deservedly defeated St Patrick's 2-14 to 0-8.

Played in front of the RTÉ cameras at Netwatch Cullen Park this evening, Pado Flynn's charges laid the foundations for this fully merited victory in the first-half when they hit the Wicklow champions for seven unanswered points and a sucker-punch goal from man-of-the-match Conor Crowley. They will face either Castletown or Portarlington for a place in the last four at Croke Park.

Leading by 0-1 to 0-3 inside the opening ten minutes, St Pat's started the game more impressively, but Palatine gradually imposed themselves and three points for corner-forward Crowley and the exceptional free-taking of Shane O'Neill had them five up. When Crowley found the net on 29 minutes, it opened up a seven-point gap at the interval, 1-8 to 0-4.

Despite the best efforts of 39-year-old Podge McWalter, a St Pat's comeback was never likely as Palatine's pace and power proved too much for Robbie Leahy's side to handle. Thomas Sheehan's 46 minute goal after the initial effort was punched against the post had Flynn's men out of sight.

Palatine win their first ever Leinster Senior Club win in style , home to winners of Castletown or Portarlington in 2 weeks time@SETUCarlowGAA_#TheToughest