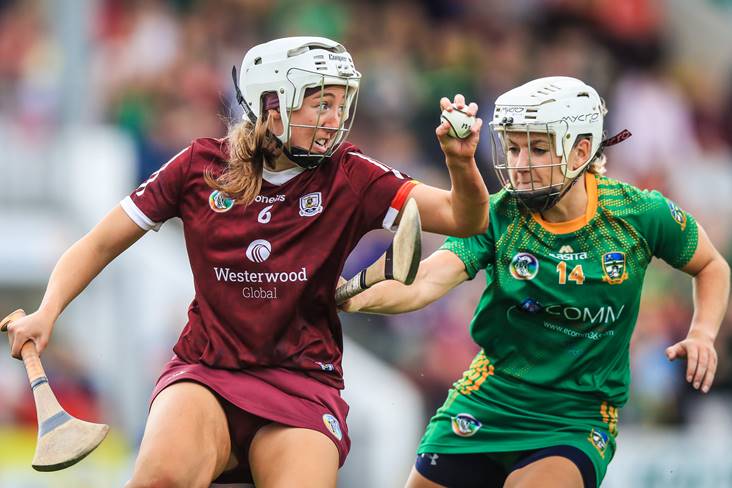 Galway may have secured their position in Sunday’s Glen Dimplex All-Ireland intermediate camogie final (2pm, live on RTÉ2) by winning every single game, unlike opponents Cork, but one gets the sense that it has come as just a little bit of a surprise.

With a massive squad overhaul this year, they would have been buoyed by only losing to a senior team, Antrim in the Littlewoods Ireland Division 2 League.

With Cork, Derry, Meath, Kilkenny and Wexford in Group 2, they were undoubtedly given an easier draw in the championship and capitalised, scoring 11-97 and conceding just 41 points in five games.

They showed a lot of character to edge out a hardened Meath unit by four points in the semi-final at UPMC Nowlan Park last Saturday week and here they are, captain Lisa Casserly an hour away from leading her young side to the Jack McGrath Cup.

“When everyone starts out pre-season, the end goal is always to get to Croke Park but I suppose for us, we’ve had a lot of turnover of players from last year, so our main goal was to just get the minors in, try and get a structure in place and we really just took it one game at the time then from that,” explains Casserly.

Olwen Rabbitte, Clara Hickey, Ally Hesnan and Niamh McInerney were all members of Galway team that lost to Cork in the All-Ireland minor final in March.

They have added real energy and belief to the squad and it said a lot that having cruised through the group, they recovered from a first-half wobble, precipitated by the concession of Aoife Minogue’s fabulous second minute goal, to fashion that 3-9 to 2-8 triumph courtesy of second half goals from Laura Kelly and Rabbitte.

“We knew going down there it was going to be a massive challenge. You could see the scoreline differences between our group games and the other side. There was margins by one point, two points in their group.

“We got off to a good start in our group campaign and powered through with the scores but when we went down there, it was definitely a different game. Meath hit us in the first half. We hadn’t had a goal scored against all the campaign and there was an early goal but we learned a lot from it. We were by no means perfect. There were a lot of learnings that came out of the game but we definitely needed that tough challenge for sure.

“We just stuck to our own game. We knew that they’d get their purple patch but we were just hoping we could get the ball back down the other end, get a few scores and keep ticking over.”

Casserly is a member of the intermediate panel since 2017 and was called up to the senior squad two years later, garnering two All-Irelands as a sib. She, Ciara Donohue and Tara Rutledge are the only survivors from the two-point loss to Westmeath in the 2019 All-Ireland intermediate final, though the long-serving Ruttledge – an All-Star nominee as a teenager in 2010 – is ruled out through injury.

“I suppose this year we needed to step up and we have given the girls the perspective that All-Irelands don’t come around too often,” says Casserly of her increased leadership responsibilities in such a youthful set-up.

“Cork are going to be a phenomenal team. They’ve had a great campaign themselves. So we’ve been able to ground the girls as well and give them the perspective of being on the other side, in 2019. It’s not the side you want to be on. Definitely for the older girls we just have that hunger to try get over the line this year for sure.”

Ruttledge’s absence due to a cruciate ligament injury is a blow but Casserly is more cognisant of the personal disappointment for the Portumna player. That said, Ruttledge is likely to be very visible, and most certainly audible, on Sunday.

“She’ll be a big loss but I just feel for her, as she’s given so much to this intermediate team. She’s going to puck every ball. If you watched the match against Meath, she was up and down the sideline, cruciate or no cruciate. She pucked every ball with us and she’ll definitely do the same next Sunday and I just hope we can get it over the line for her as well.”

Losing their grip on the O’Duffy Cup had to be parked quickly, with the intermediate semi-final taking place the following day. That they did so spoke to the professionalism of the players involved and the excellence of manager, Cathal Murray, who has transformed the westerners from being viewed as consistent only in their inconsistency, to being the most regular winners of national titles (four from seven) in the Sarsfields man’s four full seasons at the helm, having taken over mid-way through 2018. As well as the two All-Irelands and two Leagues at senior level, Murray has also steered the intermediates to two All-Ireland finals.

“It was a huge disappointment but credit to our management team. Obviously, things didn’t go to plan on Saturday but they had to get their heads right and get back on the bus with us on Sunday.

“The senior girls have been so supportive. The minute that match was over, they were texting us and driving us on. We are one unit in Galway and Cathal has had that since he came in. Galway Camogie is Galway Camogie, whether senior or intermediate.

“Cathal has brought Galway Camogie to the next level. His professionalism, the way he carries himself and with two teams, it’s unbelievable. The talent in Galway and the competition for places in both squads is unbelievable. When you go down training, sometimes you look and you wouldn’t know whether you’re looking at the senior or intermediate team based on the set-up. He has every management at both trainings. He has really brought a lot to Galway Camogie.”

Casserly hasn’t taken the conventional path to Croke Park. She wasn’t an underage prodigy, focussing instead on soccer. She was a member of the national squad that reached the U19 European Championships semi-final in 2014, alongside Cork star, Amy O’Connor. ROI and Arsenal hero, Katie McCabe was another colleague.

She enjoyed playing camogie for Ballinderreen and after taking some time out from soccer, her grandfather asked her to give camogie a real go for one year to try maximising her potential in that sphere. And she hasn’t regretted it for a second.

The 26-year-old retains a keen interest in soccer though and watching the televised coverage of the recent European Championships, marvelled at the increase in profile and standard. The same improvements have occurred in camogie, she notes, and while you would always like the graph to spiral upwards at a quicker pace, women’s sport is tracking in the right direction, she contends.

“I do keep an eye on it and even for our own Irish girls, the talent is there and a lot of them are playing overseas and you can see what (ROI manager) Vera Pauw has brought to the team. They’re playing (against Finland) in September. The tickets were sold out in record time, in 30 minutes. That’s a massive token to the girls and they are playing brilliant soccer. The standard has definitely come up. It was just a pity not to see them in the Euros but their World Cup qualifying campaign is going brilliant.

“It’s nice to see and so different to when I was playing. Even the coverage that they get. It’s just brilliant. And for the camogie as well. More and more people are talking about it and women’s sport in general. It’s definitely come on and it’s great to see.”

With Casserly at the forefront, it may well be Galway who will be the talk of Croke Park on Sunday.