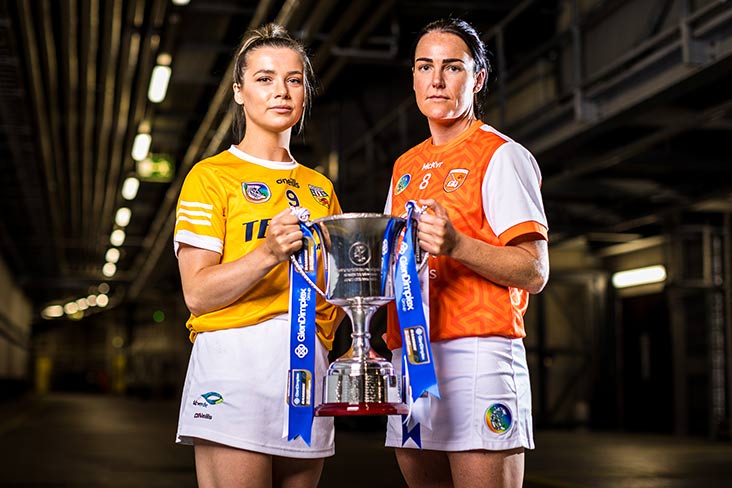 Last September, Emma Laverty was a maelstrom of emotion. There was some happiness for her friends but the prevailing feeling was one of devastation.

She had been an integral part of the rebuilding of Antrim camogie, one of the more senior players providing the necessary glue as prodigious, nascent talent poured forth from the underage and schools’ systems.

Reaching the All-Ireland intermediate final in 2020 seemed merely a rung on the ladder to inevitable progression and Laverty began the following season committed to that cause.

But while Maeve Kelly and Róisín McCormick were taking to Croke Park as to the manor born, Laverty was in civvies.

Making the decision to step away had been difficult, nay heart-wrenching. She was accustomed to spending a lot of time with the same group of people that she would now not see much of and she knew that she might be giving up on something she had dreamed of in the saffront jersey.

But the increased commitment required as Antrim looked to beef up their conditioning programme on the back of coming off second best in the physical exchanges against Down, was a problem.

She had been part of the collective agreement that it was necessary but as an interior architect at Belfast-based firm Todd Architects, it meant an increase in mileage. She tried to make it work but the demands began to take their toll on mind and body. Inevitably, her form suffered, so she made the call to step away and get back to enjoying her camogie with Ballycastle.

After Antrim defeated Kilkenny to secure senior status, it was decided that perhaps it would be a good time to field a second team, to help blood emerging players and keep others just on the periphery involved.

Brian Kearney and Mark McFadden were appointed managers. Kearney knew Laverty, very well as it happens, as she is going out with his son David. He got in her ear, knowing that someone of her ability and experience would be invaluable to a project many in the county considered doomed.

In truth, she didn’t need much persuading and was honoured to be appointed joint-captain with Maria McLarnon. Now, they are an hour away from securing the Glen Dimplex All-Ireland Premier Junior title on Sunday, with Armagh, managed ironically by Jim McKernan, who stepped down with Paul McKillen as manager of the intermediates after their All-Ireland success last year, and who Laverty knows so well, in the opposite corner (throw-in 12pm – Live on RTÉ2).

“I took a second chance,” Laverty admits. “Brian was chatting to me about coming back and there was that devastation of, you could have had an All-Ireland. That’s what’s been in my head the whole year. It’s in all our heads now to win the All-Ireland but I stepped away myself last year so it’s a personal thing for me.”

She understands why Kearney and McFadden turned to her and McLarnon to share the leadership responsibilities.

“I suppose we’ve just got that experience of playing so long. You’re confident in yourself to speak out and correct things and lead the girls. We’ve a lot of young ones just out of minor, so they need that experience around them.

“It goes (in age) from a lot of ones just out of minors and then a bit of a gap to those of us in our late 20s. We’ve so many girls with so much potential to be on that senior team. This was our first (junior) team together and it was some girls’ first team at county. No one had seen the potential, whereas now, we’re just completely rebuilding.”

It has been a remarkable few years for Antrim camogie.

“For a long time, when I was coming through, we couldn’t even get a county team together and it was just dying. It just took one group of girls to commit together and everyone pushed on. They’ve a great set-up. It’s unbelievable now. We’ve gear, we’ve food after training. There’s so much commitment from the county board, management, everything.”

It took two periods of extra time to get over Clare in a remarkable semi-final, Megan McGarry hitting the winner from a free.

“When we came home, we went to Cushendall and the place was bunged with people. Everyone’s just been talking about it since. It’s crazy. Credit to Clare. They pushed us to the very end and obviously it was gonna be a tough defeat, no matter what, but we’re just happy we got the win!

“I came off with cramp and I was just, ‘Get me back on the pitch.’ The whole team was, ‘We cannot lose this.’ The effort we’d put in. We were thinking about that All-Ireland final.

After missing out last year, Laverty will, like everyone else on the Antrim panel, be playing at Croke Park for the first time. But she knows not to let that, or anything else, become an overpowering factor.

“We’ve said it, not to let the occasion, that it’s in Croke Park, take away from the fact you’re in an All-Ireland final. You have to win. Imagine standing on that pitch feeling the defeat It would be terrible. So we’re training hard and heads are settled.”