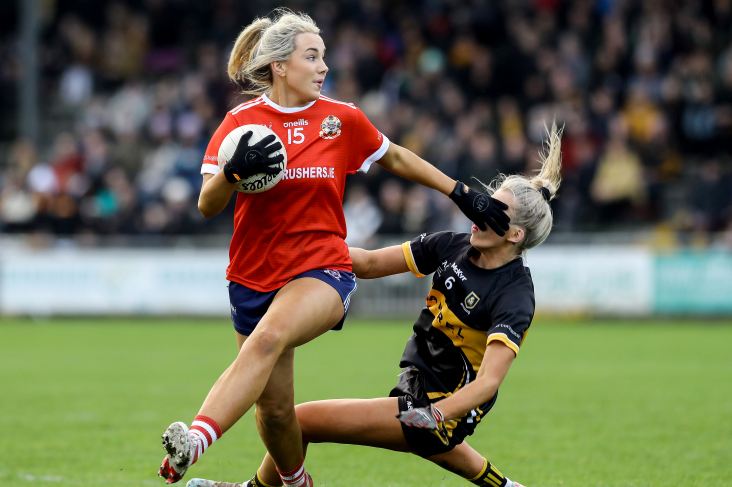 Chloe Miskell scored the first goal as the All-Ireland champions rubberstamped a first Croke Park appearance in two weeks’ time after efficiently building up a 1-5 to 0-0 interval lead, before Morrissey’s second on the three-quarter mark wrapped up proceedings.

Kilkerrin-Clonberne gradually used the elements well in the first half as they opened through a Miskell point on seven minutes.  It was quickly followed by Louise Ward making it 0-2 to 0-0 as the Connacht champions made full use of their experience.

Beforehand, the first chance came when Miskell forced a stop from Lauren Fitzpatrick. And while the Galway outfit continued building their lead, they could have forced goals as Morrissey, Olivia Divilly and Ward again put five between them by 18 minutes.

Ballymacarbry weren’t without chances and did kick two first half wides. However, the half’s critical moment came on 27 minutes as Kilkerrin-Clonberne played the possession game before a pass into Louise Ward. The centre forward, rotating between the three attacking lines, challenged Ballymacarbry’s defence each time she received the ball and won a free.

But with advantage accruing, she had a pot shot at goal that Fitzpatrick couldn’t hold, bouncing off the crossbar. Miskell was quickest to react, rounding the Tipperary stopper to get the goal and give Willie Ward’s team a 1-5 to 0-0 interval advantage.

Ballymacarbry needed a boost and got it within 30 seconds of the restart as substitute Maeve Ryan took Brid McMaugh’s pass for their first point. But Kilkerrin-Clonberne continued where they left off as Morrissey and Nicola Ward stretched their lead to 1-7 to 0-1.

Ryan got another Ballymacarbry score before the defining goal for the visitors to a rainy southeast. Nicola Ward fed Miskell who opted not to shoot, passing out to Morrissey who finished the ball into the top corner of the net.

That left it 2-7 to 0-2 and as both managements emptied their benches; Kilkerrin-Clonberne continued building their tally. Divilly, Hannah Noone and Morrissey all converted to give the title holders a 2-10 to 0-2 as they remain unbeaten since the 2019 All-Ireland final.