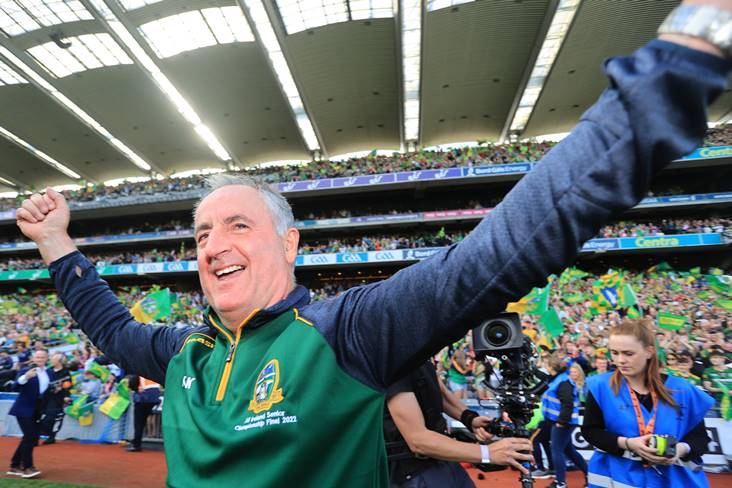 Meath manager Eamonn Murray believes his brilliant champions can be an inspiration for the likes of Kerry after they secured back-to-back TG4 All-Ireland Senior Championships.

In a fifth successive All-Ireland decider for the Royals at Croke Park, they have now followed up an intermediate success, with two of the senior variety and remain the team to beat.

Meath upset Dublin in the showpiece event last year but this was a more comfortable victory with Emma Troy’s goal helping them into a 1-8 to 1-5 half-time lead before Niamh O’Sullivan and Bridgetta Lynch put the result beyond doubt.

“I think we showed Kerry and a few other teams that it can be done (making the breakthrough),” said Murray.

“Kerry probably thought during the week that they know all about our system and how we play. Dublin thought the same last year but when you hit this system you know all about it.

“We weren’t that worried during the week. It’s strange times to be a Meath footballer manager. It can only help for the future. That crowd we had there was amazing. It’s worthwhile doing it for them alone.”

Kerry made a whirlwind start and when Louise Ní Mhuircheartaigh lobbed Monica McGuirk in the Meath goal, it gave the challengers a 1-2 to 0-0 lead after just seven minutes.

But Meath showed the composure of champions and reeled off an unanswered 1-6 to take a four-point lead. Troy’s top-corner finish was vital to gaining the ascendency.

Kerry scored three of the remaining five points in the first half but Meath still had plenty in the tank going in at the break.

Síofra O’Shea and Ní Mhuircheartaigh had reduced the arrears to the minimum by the 35th minute but that was as close as it got as Meath closed out the game with ease.

O’Sullivan scored her goal with 15 minutes remaining and a few minutes later Lynch grabbed her own rebound to send Meath back up the Hogan Stand steps to reclaim the Brendan Martin Cup.

And for Darragh Long, the joint-manager of Kerry, it was a difficult defeat to take as Kerry’s 29-year wait goes on.

“We came up here full of belief, full of confidence that we could come away with a victory,” said Long.

“We got a fantastic start, we went 1-2 to 0-0 up. Gave away a very silly goal, Emma Troy seems to be our nemesis. We competed really well in the first half. Again, started the second half quickly, got two scores on the board and then just sloppy mistakes from ourselves. The first half and second half, sloppy mistakes led to stupid turnover ball.

“They came down and fair play to Meath, I think Eamonn Murray said during the week that they’ve timed their run to perfection. They kicked 3-10 in the end. They’re All-Ireland champions for a reason.

“But hugely proud of our group of girls. We’ve come an awful long way in 12 months, from Mallow last year and a relegation battle. Just hugely disappointed.”