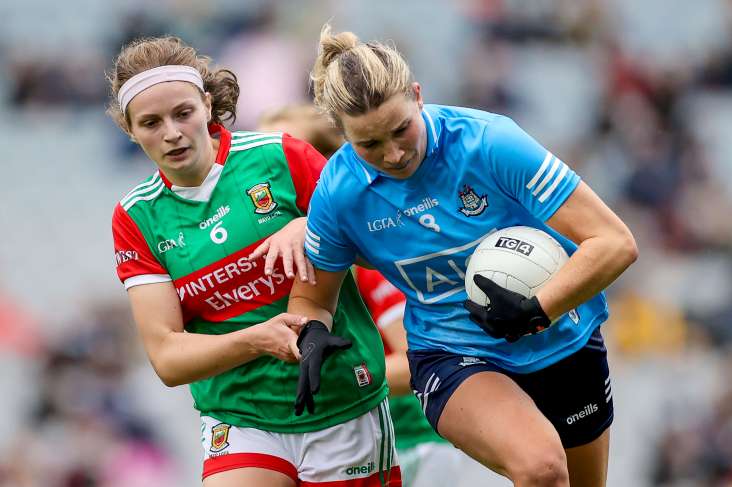 Jennifer Dunne inspired Dublin to victory and top of Group A in the TG4 All-Ireland Senior Championship at Mayo's expense in O’Moore Park, Portlaoise.

This was Dublin’s third win from three in the group, as last year’s beaten finalists set up a clash with Donegal in the quarter-finals. Mayo are also into the last eight where they will face Cork.

Michael Moyles’ side had the breeze at their backs in the first half but Dublin still burst out of the blocks with two early points from Carla Rowe and Nicole Owens. With kicking from distance an option at the other end, Mayo were able to get on the scoreboard throughout the first half through Tara Needham, Sinéad Walsh and Sinéad Cafferky, but they weren’t able to pile on the pressure, and Dublin secured an 0-08 to 0-05 interval lead, despite not kicking any score from more than 20 metres out.

Dunne took advantage of the increased scoring range when she hoisted over a magnificent point to open the scoring in the second half, and while Shauna Howley replied immediately for Mayo, that was to be their third last point.

Defensively, Mayo held out for as long as they could but their faint hopes of pulling off an upset were all but extinguished when Rowe and Dunne set up Kate Sullivan for the game’s first goal in eighth minute of the second half, pushing the lead out to seven points.

A measure of the quality available to Dublin manager Mick Bohan was when he was able to spring four-time All-Ireland winner Lyndsey Davey off the bench and the Skerries Harps player made an immediate impact after coming in, adding the finishing touch to Owens’ pass for Dublin’s second goal.

Hannah Tyrrell also featured strongly in the second half, scoring three times, but she also picked up a yellow card with ten minutes to play, and this opened the door for Mayo to enjoy an increased share of the play in the closing stages.

Their unflinching efforts were rewarded when Lisa Cafferky pounced on a breaking ball and sidestepped Ciara Trant for a late goal, but they still have questions to answer in advance of what’s sure to be a tough test against the Rebel County next time.