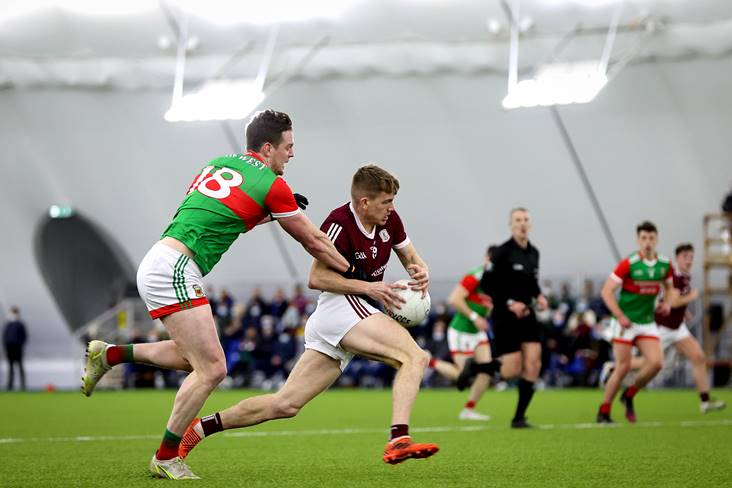 Galway advanced to the Connacht FBD FL final with a deserved four-point victory against near neighbours Mayo at the NUI Galway Connacht GAA Air Dome in Bekan last night.

Shane Walsh, Tomo Culhane and Paul Kelly fired a point each from off the bench down the home stretch to secure a valuable 0-17 to 0-13 win for the Tribesmen, Padraic Joyce's first over Mayo as manager as the Killererin man enters his third season in charge. They will now face the winners of tomorrow's meeting between Roscommon and Sligo at the same venue next Friday, 14 January.

Another notable feature of Galway's victory was that ten members of their 2020 All-Ireland U20 side lined out at the Dome.

While the Tribesmen were on top for the majority of the opening half, Mayo were quickest out of the blocks, registering the first two scores after four minutes through Fergal Boland and debutant Sam Callinan.

Johnny Heaney fired Galway ahead for the first time in the 12th minute after raiding up the field and three brilliant Paul Conroy points were the difference on the scoreboard as they led 0-10 to 0-7 at the break.

The second-half introduction of All-Star forward Ryan O'Donoghue helped stem the flow for Mayo, with the Belmullet sharpshooter hitting three quickfire points, including two frees, to reduce the gap to one by the second water-break, 0-13 to 0-12.

However, Galway would outscore their opponents by four to one for the remainer of the contest as Walsh, the orchestrater, Culhane and Kelly got in on the act to see their side through.