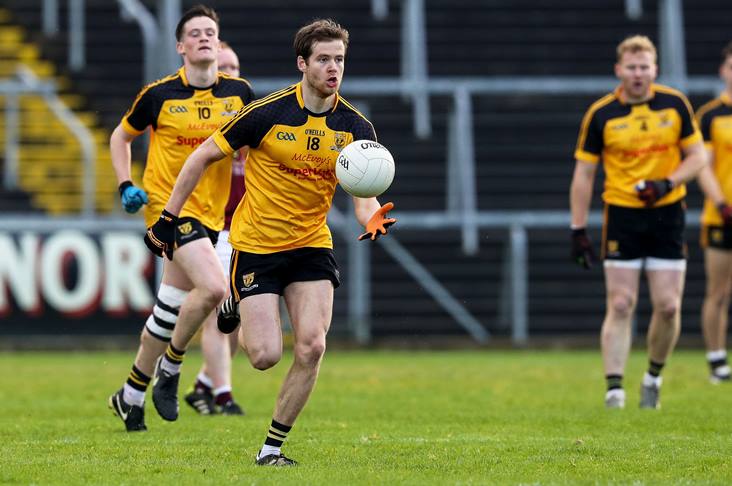 Gowna and Ramor United both recorded wins at Kingspan Breffni today to complete the semi-final line-up for this year’s Cavan senior football championship.

Gowna were comfortable in a 1-14 to 0-6 victory against Mullahoran to advance after bossing their neighbours in the second-half in Cavan Town.

Having run up a 0-6 to 0-1 lead by the 17th minute, Gowna went on to lead by two at the break after late points in the half from Philip Brady and Enda O’Reilly (2 frees) kept the Dreadnoughts in contention.

Gowna shot the lights out at the start of the second-half – literally – as the game was delayed eight minutes into the restart due to a problem with the flood lights in the stadium.

When play resumed, the would-be winners added to their 0-10 to 0-4 advantage with points from TJ Fitzpatrick, Conor Madden and Robbie Fitzpatrick that all but closed out the win in this one-sided derby.

To make it all the sweeter for the Division 1 champions, veteran attacker Gerald Pearson came off the bench for the final five minutes and hammered in a goal within two minutes of his introduction.

Gowna now face 2020 runners up Kingscourt Stars in the semi-finals after the Meath border men’s victory over Lavey yesterday.

Earlier in the day, Ramor United were pushed all the way by Ballinagh at Kingspan Breffni before booking their last four berth on a 1-13 to 0-13 score-line.

Jack Brady’s 27th minute goal proved crucial in the end for the Virginia men after they’d led by 1-9 to 0-6 at the half.

Ballinagh started the second-half in brilliant fashion with three points from Kevin Smith (two frees) halving their deficit and it would be nip and tuck from there to the finish.

Smith, Thomas Moore and Niall McDermott kept the pressure on the 2016 champions but the scores of Sean McEvoy, Simon Cadden and James Brady saw Ramor through to a mouth-watering semi-final date with Cavan Gaels.

Elsewhere, Castlerahan suffered relegation in the afternoon via a 1-11 to 0-8 defeat at the hands of Killygarry in Crubany.