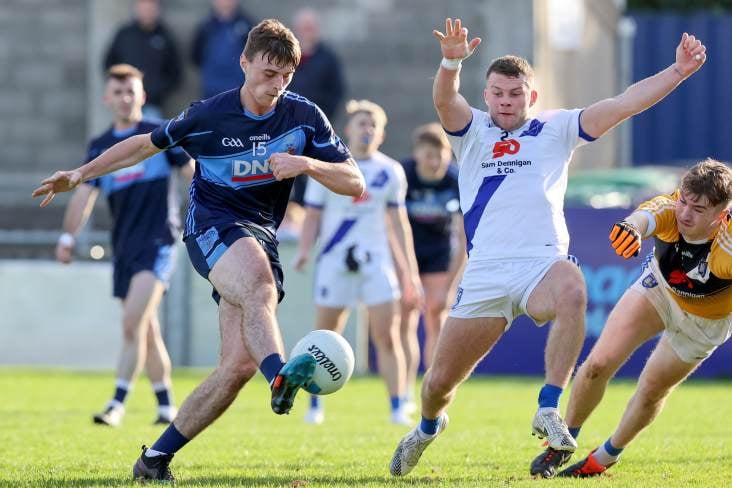 The Dublin senior football championship is down to its quarter-final stage after Na Fianna and St Jude’s both secured slots in the last eight this afternoon.

Brian O’Leary and Aaron Byrne combined for 0-10 over the hour at Parnell Park as Na Fianna scored a 0-17 to 0-11 victory over Raheny.

The deadly duo helped their side to lead by 0-8 to 0-4 at the halfway stage and, while Dublin midfielder Brian Fenton and Sean Grenham (free) pulled back scores for Raheny, it was their opponents that dominated the closing quarter to secure a date with Kilmacud Crokes in the quarters.

St Jude’s were in impressive form in the later game at Parnell Park, where they handed Round Towers Lusk a comprehensive 2-23 to 0-7 defeat.

Alan Connolly and Niall Coakley bagged the goals for the Saints to rubber stamp their place in the quarter-finals against Thomas Davis.

Meanwhile, Lucan Sarsfields will play holders Ballymun Kickhams after they finished 4-16 to 0-9 winners over St Oliver Plunketts at O’Toole Park.

The remaining quarter-final will be between Ballyboden St Enda’s and the winners of the playoff between Castleknock and Ballinteer.

Three of the four #GoAheadDSF1 quarter-final pairings are now confirmed, following the final round of group fixtures this weekend. @CastleknockGAA & @gaabsj will meet in a playoff to decide the remaining spot, after they couldn't be separated in the final Group 2 standings. pic.twitter.com/d79Mxm8AQ3