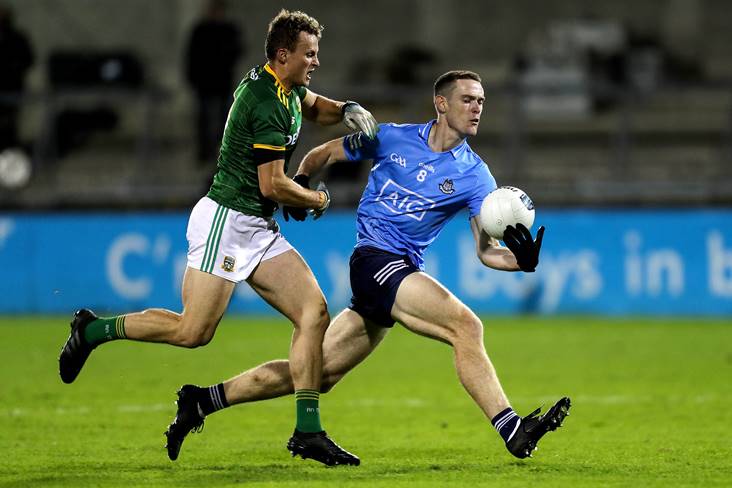 Dessie Farrell’s men led from the fifth minute onwards but never pulled far away from their impressive neighbours whom managed to recover from a disastrous start.

Thomas O’Reilly landed four frees consecutive frees in the run up to half-time to leave the Royals trailing by three at the break and they’d cut it down to one after the restart.

However, Rock, Ciaran Kilkenny and Con O’Callaghan steadied things for the Dubs as they went on to pick up their third win.

For Meath, already relegated coming into this contest, it was another battling defeat which marks their sixth in the top tier in 2020.

Shane Walsh had the Royals off the mark inside three minutes of this derby clash with a point from his corner-forward station.

Con O’Callaghan levelled a minute later and in the next attack the ball would be in Meath's net, with marksman Rock supplying the neat finish.

Rock (2) and Ciaran Kilkenny added points that put the All-Ireland champions five to the good after seven minutes prior to Rock adding his third from play. 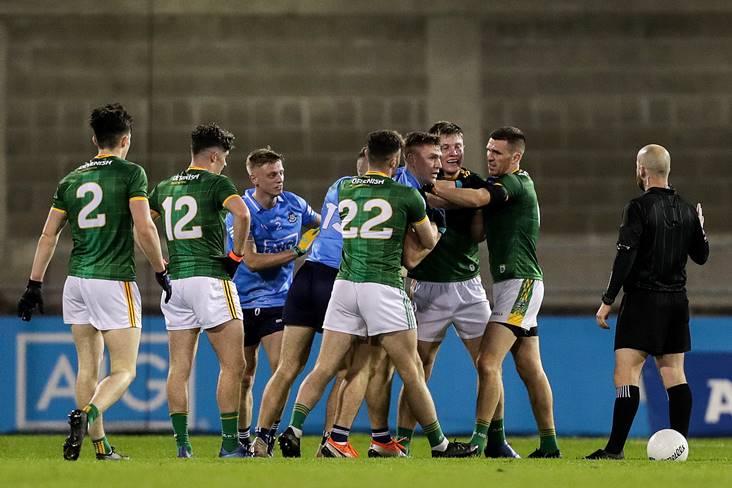 To their credit, the visitors responded well to that assault on their goal as Cillian O’Sullivan and Walsh sailed points ahead of Walsh grabbing his third to erase a free from Rock.

Points from Brian Fenton, Kilkenny (free) and Paddy Small made it 1-8 to 0-4 on 22 minutes ahead of Bryan Menton and O’Callaghan trading scores.

Small notched his second from play with less than 10 minutes to go in the half and they were minutes that the Andy McEntee’s charges would dominate.

The dominant spell was converted in the form of four O’Reilly frees which brought Meath right back into the game, as the scoreboard read 1-10 to 0-10 at the half.

Fenton pushed the capital men’s lead back out to four early in the resumption but the Royals were still rolling, as O’Sullivan (free), O’Reilly (free) and Walsh made it a one-point game by the 42nd minute.

Rock and O’Reilly each did what they do best to maintain that margin before the former shot another free to make it 1-13 to 0-14.

Eoin Murchan, Brian Howard and Cian O’Sullivan had all entered the fray for the leaders by the midway point of the second-half and another free from Rock helped steady the ship that bit more.

O’Callaghan and Brían Conlon traded points and substitute Jordan Morris did likewise with Rock down the game’s home stretch to leave a score in it in injury-time.

Farrell’s charges didn’t look like conceding one though, as they picked off points in Meath’s end via reliables Kilkenny (2) and O’Callaghan to wrap up the points and mark a winning return after a seven-month break in the competition.