'Any time I feel crap, I think of him' 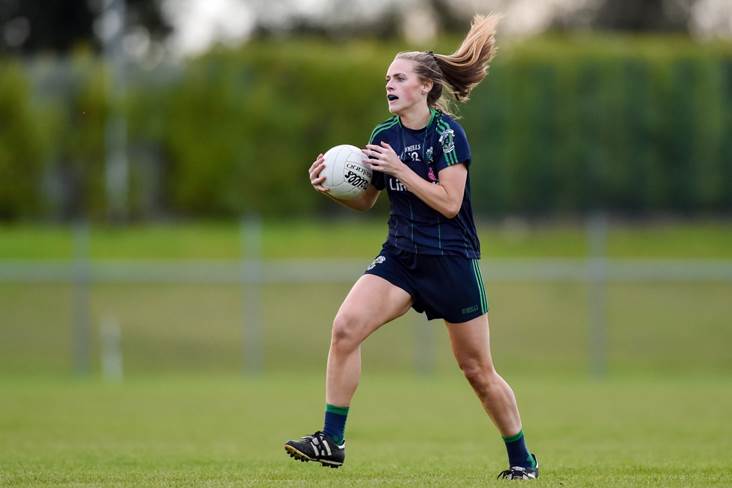 Cruciate ligament injuries can end a career in an instant or at least invoke a profound change in its direction.

On 2 July 2017, Dublin were training in Cuala ahead of their TG4 Leinster Senior Championship final against Westmeath. Experienced forward Amy Connolly caught a ball and was about to turn when her right knee caved in. But there was no sharp burst of pain. The Ballybrack native had never suffered a serious injury before and it seemed innocuous.

Dr Noel McCaffrey was the first to suggest Connolly had suffered ligament damage, and when he reviewed the MRI results, he confirmed the worst.

It was a big setback, and although she didn’t play for Dublin or Foxrock-Cabinteely again that year, she stayed loyal to both teams.

After three TG4 All-Ireland final defeats, Dublin claimed their first Brendan Martin Cup since 2010. And Connolly spent the day in Croke Park with her son, Ciabhan, on her lap.

The apple of her eye turns six at Christmas and she knows how important he has been through injury, and two All-Ireland senior club final defeats with Foxrock-Cabinteely.

“When I got injured it was all put in perspective,” said Connolly, the current club captain. “When you compare it to other things in your life, Ciabhan is my number one. When people play sport they feel injury is the worst thing that can happen but it isn’t. Any time I feel crap, I think of him.

“It was great when other people were giving praise in relation to how I was taking my injury but the only reason I was so positive was because I had perspective.

“Ciabhan was so innocent and he was like: ‘I will help you’. I couldn’t help but think everything was going to be okay.”

Connolly’s Foxrock-Cabinteely rose from Junior E in Dublin to reach their first All-Ireland senior decider in 2016, where they lost to Donaghmoyne.

The Dublin champions returned last year and were beaten 1-13 to 1-6 by Mourneabbey in the final at Parnell Park.

Tomorrow, they go to Galway and Connacht champions Kilkerrin/Clonberne in the semi-final. But no matter the result Connolly (28) knows her biggest fan will still be cheering her on.

She is one of three mothers on the team, along with Emma McDonagh and Lorna Fusciardi, and she appreciates the support from the sidelines.

“I will always be the uncool mom but Ciabhan will appreciate it when he is older,” said Connolly.

“I always laugh. The amount of the photos of the team, and he is the only boy in the photo, the other two are young girls.

Connolly gave up her Dublin career after she claimed her second All-Ireland senior medal in 2018. She has vast experience at county level but working long hours as an accountant at KPMG, family life and club commitments mean the inter-county dream has been parked.

She shared an emotional moment with Foxrock-Cabinteely’s Peter Clarke when she found out she had damaged her knee. He was the second phone call after Dublin manager Mick Bohan.

They cried together as she broke the news to not just her manager, but a great friend too.

“We are like a community,” said Connolly. “We have been through our own personal stuff, management and players. But our families are always there.

“I noticed the last few weeks, when we have been celebrating the Leinster final. With the three kids on the side on the pitch it makes it all the better.

“I remember Caibhan after the All-Ireland final last year. He came over to me and gave me a hug. You instantly feel like, I will get over this.”

Connolly was one of the driving forces behind Foxrock-Cabinteely’s first All-Ireland title, at junior level in 2007. Last month’s 4-6 to 1-7 win over Sarsfields registered a fifth straight Leinster senior title.

The biggest prize still eludes them, but even with that on her mind Connolly had to miss a training session last Sunday to attend a lecture. Her FAE chartered accountancy exams are next on the horizon.

“There is one mid-term exam at the beginning of December which isn’t ideal with football still on the cards,” said Connolly.

“But that is why I had a few words with Peter. I have missed loads of lectures already with our matches on Sundays. But last weekend I had to go to a lecture instead.”

Connolly was back with in Santry during the summer. It was another operation on the same knee, this time a minor keyhole procedure on some cartilage. But nothing will stop her from taking aim at All-Ireland glory. And with Kilkerrin-Clonberne standing in the way of a date with destiny for a third time, Connolly is desperate to advance past the final four.

“It is going to be a great match. Both teams want to play. There are high profile names on both teams. They are a great footballing team and it can only be a great game.

“There isn’t much between the two sides. They have class players, you have to acknowledge that but you focus on yourself. If you focus too much on the other team it takes away from your game.

“I am very excited for this.”