Camogie: Sammon leaps to send Shinrone into another final 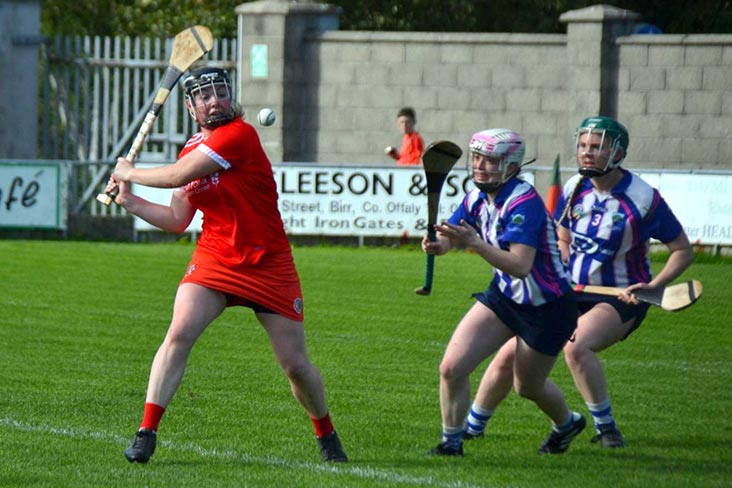 The clash of Shinrone and St Cillians was a competitive match where Shinrone lead from the start and St Cillians were always chasing.  At half time it was Shinrone 1-6 St Cillians 0-5 in a half that saw a ball come off the St Cillians post and a good reaction from Ciara Sammon at full forward saw the ball go into the net for Shinrone.

Grainne Egan made life very uncomfortable for St Cillians with attacking runs at their defence throughout the first half. St Cillians looked sharp up front with Caoimhe O’Donovan and Rachel Brennan being their main threat and with the quality of Aisling Brennan and Caitlin Fitzgerald feeding ball in to them it was an exciting first 30 minutes. However Sharon Shanahan was dominant as sweeper for Shinrone and cleared a lot of easy ball up the field for her team.

In the second half Micheala Morkan and Grainne Egan increased Shinrone’s lead and St Cillian’s kept in touch with frees from Dara Hanamy. St Cillians never gave up and got to within one point of Shinrone after a strong comeback in the last 15 minutes, which saw them have a lot of possession and with 2 minutes to go it looked like the game could have been heading to extra time but Shinrone just did enough to keep ahead of the opposition with two more frees converted in the dying minutes of the game.

It has been a tough few days for St Cillians who lost in a dramatic finish in Intermediate Cup Final just seven days previously with some of the same players involved.  But, with such a young team of talent they will have other opportunities to be on the right side of the scoreboard in years to come. Shinrone have had a steady team line out for the past few years and that experience proved its worth for them in the last 15 minutes. Grainne Egan was on fire for Shinrone and was their main target on every attack. Sharon Shanahan had an excellent game after a lot of days sitting on the bench due to injury. With the likes of Marion Crean, Micheala Morkan, Christine Cleary, Caitlin O’Meara to name just a few, Shinrone have a team that will fancy their chances in the final