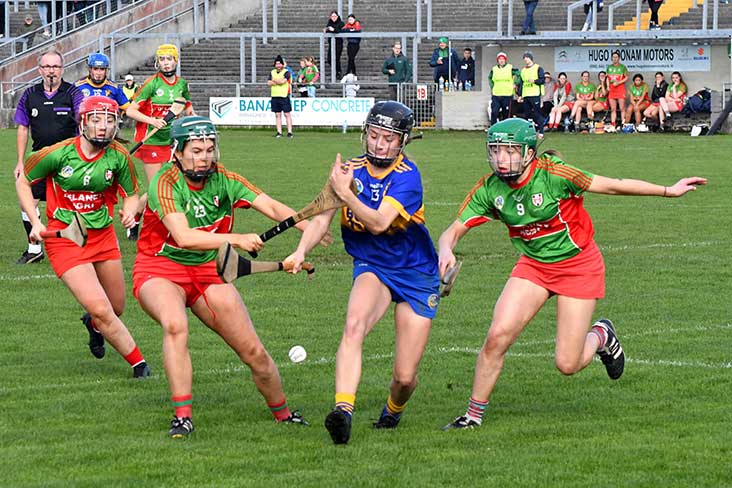 A determined Birr side ended St Rynaghs’s five-year reign as Offaly Champions on Saturday in a hotly contested semi final of the HQ Senior Championship in St Brendan's Park.  In their group stage match just two weeks ago, Birr showed signs of what St Rynagh's could expect when the Champions narrowly beat them in a fiery game under lights in the Faithful Fields.  But Birr's youthful team have been showing signs of a team in sync with each other at the right time.

As the semi final progressed the Birr forwards were sharp and looked threatening everytime they had the ball in St Rynaghs goal area. St Rynaghs will grieve the opportunities that they missed but in the end Birr were the team that wanted it more and took their chances when they came.

Faye Mulrooney was outstanding and when Sarah Harding was introduced at half time she was crucially influential, scoring one goal with her first touch from a high lobbing ball from Mairead Jennings and shortly after Harding scored a contender for goal of the championship from outside the 21 yard line, a strike that any goalkeeper would do well to get a hurl to.

A half time neither team would have been happy with their performance only registering four scores each with Birr leading by 1-3 to 0-4.  Both teams had goal chances in the second half, Faye Mulrooneys goal came after 14 minutes when Mairead Jennings drew the St Rynaghs defence out to the side and made the pass to Mulrooney in front of goal who finished with aplomb.  Kate Kenny was dominant for Rynaghs as always with a massive score of 12 points, 6 coming from placed balls, Louise Mannion and Mairead Daly were the only other scorers for St Rynaghs with one point each.  Faye Mulrooney was Birr's top scorer with 1-4, followed by Sarah Harding with 2 goals and Mairead Jennings with 2 points.

Birr’s team deserve high praise across the board displaying a good mix of experience and youth to come out on top in a second half that was not for the faint hearted as they now look forward to their second Senior Final in a row.