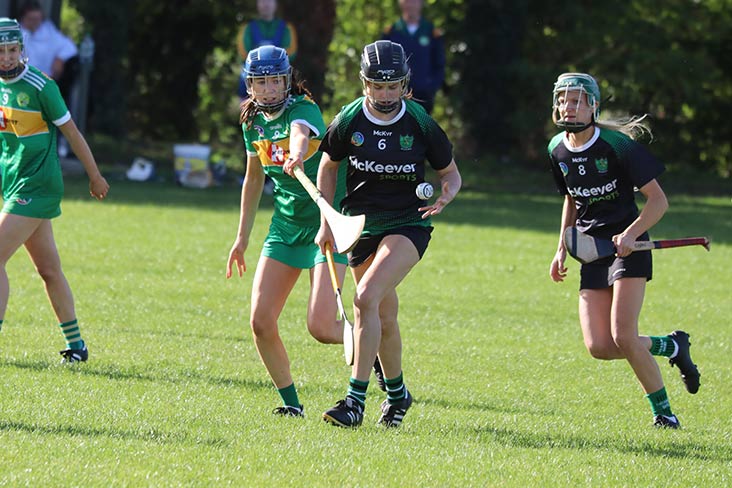 Naomh Brid would have gone into Saturday's second semi final in Kilcormac as favourites given that they have won two of their group matches whereas Kilcormac/Killoughey sat at the bottom of the group, albeit on scores conceded  But Naomh Brid certainly did not have it their own way as they were met by a strong challenge and were made fight hard for their win.

Before the match the sight of Kilcormac/Killoughey warming up in new black training tops could not go unmentioned.  The team wanted to commemorate the memory of their friend Ashling Murphy and donned jerseys all numbered 23 with the words "“Ní bheidh a leithéid ann arís Ashling Murphy" across the shoulders.

When they game got underway it was a tightly fought contest with the teams trading points in a low scoring first half and it was not until the last score of the half that saw some daylight between the teams.  A long free in by Aoife Walsh was helped on by Grace Teehan and the ball landed in the back of the Kilcormac/Killoughey net to leave Naomh Brid leading 1-4 to 0-5 at half time.

The second half continued in a similar manner with the teams cancelling each other out in terms of the scores, however mid way through the half, Grace Teehan ran at the heart of the Kilcormac/Killoughey defence and slotted the ball to the net for her second goal of the game to leave five points between the teams.

The old saying of goals win games was very true here as they were the difference between the teams.  The remainder of the game again saw the teams trade scores and Naomh Brid went on to earn themselves a place in this year's B Final that will be a repeat of the Junior Final from 2020 between themselves and Tullamore.