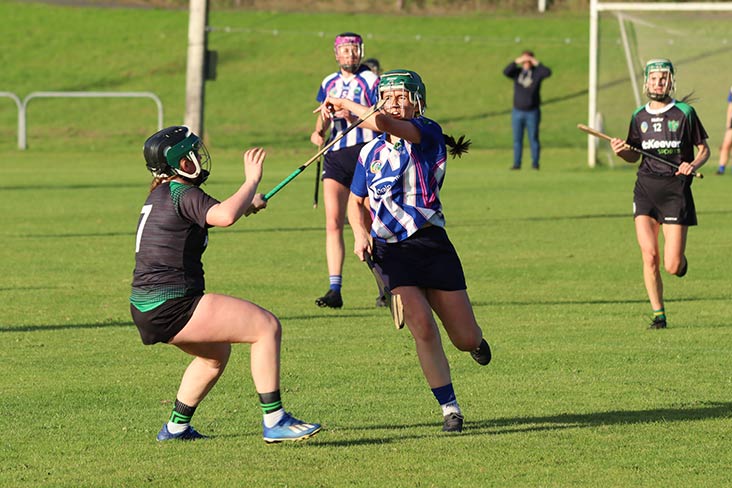 First up, on Friday evening, Naomh Brid played hosts to St Cillians in Coolderry and the visitors got off to an excellent start hitting 1-1 in the opening minutes with Aisling Brennan finding the net for St Cillians.  Naomh Brid opened their account after 7 minutes when Valarie Meagher raised a white flag but after St Cillians flexed their muscles and built up a healthy lead.  A goal from Mary Teehan did give Naomh Brid some hope but St Cillians looked comfortable at half time with the scoreboard reading 1-2 to 1-11.

In the second half Naomh Brid found their range a bit more with Grace Teehan converting a number of frees but St Cillians always kept their hosts at arms length and a late goal by Rachel Brennan put a very one sided slant on the scoreboard which read 1-10 to 2-18 when the final whistle sounded.

The champions St Rynaghs played newly promoted Tullamore in Dr Kelly's Field on Saturday evening.  In what was always going to be a daunting task for Tullamore, St Rynagh's cruised to victory to get their 2022 campaign off to a winning start.

In Shinrone, the hosts played Kilcormac/Killoughey and it was a game that was keenly fought for the first quarter before Shirone gained the upper hand and went on to dominate and score freely before half time.  They continued in a similar way in the second half despite a spirited challenge by Kilcormac/Killoughey.