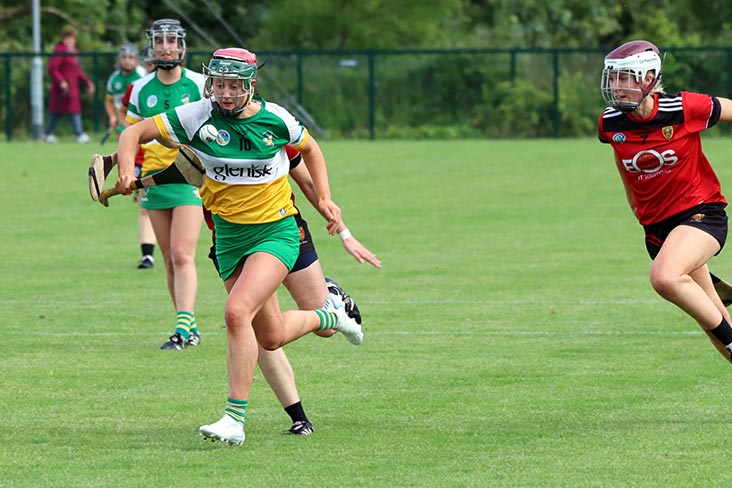 Offaly went into last Saturday's All-Ireland Senior Championship bottom-of-the-table clash with Down knowing that anything less than a win would send them into a relegation playoff and unfortunately for Susan Earner's side, despite putting in a tremendous effort, they were unable to come away with the result they needed.

Their challenge was made all the greater by the dismissal of Christine Cleary only 20 minutes into the game when referee Eamon Cassidy showed her a red card for lashing out at her opponent much to the disbelief and dismay of the Offaly woman. But credit to the Faithful team, they rallied well and emptied the tank as they battled to try get the result they desperately sought.

When the game got underway the teams cancelled each other out on the score board for the first quarter of an hour with the teams level on four occasions.  Paula O'Hagan opened the scoring when she fired over for Down but Mairead Teehan quickly replied for Offaly before Birr's Sarah Harding scored an excellent point from a narrow angle.  Down replied with a brace of points when their captain, Aimee McAleenan and Clara Cowan raised white flags.  Christine Cleary quickly levelled before Niamh Mallon pointed for the Mourne girls before Offaly shot three points without reply when Siobhan Flannery pointed  and Mairead Teehan hit over two points to leave her team leading by two.

With 18 minutes on the clock Down had a chance to take the lead but Eleanor Clendennen pulled off a fantastic save from point blank range.  Shortly after Paula O'Hagan did narrow the lead when she hit over to leave her team trailing by the minimum.  Susan Earner must wonder what she has to do to get some luck in this campaign and this continued when she witnessed the afore mentioned dismissal of Cleary and her team's challenge became all the greater.  The damage could have been even greater but for another great save by Clendennen and the Offaly response to the sending off continued when Siobhan Flannery converted a free.  Minutes later Flannery found herself in possession again and fed Sarah Harding who hit over to leave her team leading by three points.

Down, however, finished the half well when Paula O'Hagan struck a brace of points before the break to leave the half time score showing Down 0-7 Offaly 0-8.

Down continued the second half where they had left off before the break with O'Hagan and Mallon pointing.  In such a close contest it seemed that either team hitting a goal would prove to be decisive and with seven minutes gone in the half, Down finally found their way past Eleanor Clendennen when Aimee McAleenan scored after some excellent play by Niamh Mallon.  Mairead Teehan replied for Offaly after a great solo run by Sarah Harding to narrow the gap to three points.  The Midlanders then had an excellent goal opportunity when Down's short puck out was fumbled and Siobhan Flannery found herself baring down on goal but was unable to find the net to the disappointment of the Offaly supporters who had made the long journey north.

Down's markswoman, Mallon extended her team's lead when she hit over but that was to be their last score for quite some time with Offaly knowing time was running out for them and they piled forward.  They hit three points courtesy of a Flannery free and Roisin Egan and Grace Teehan scoring from play to leave just a point between the teams.  They had opportunities from two long range frees to level the scoring but they drifted wide much to Offaly's dismay but Aisling Brennan levelled the scores from a free as the match went into injury time.

The tension was now palpable as Offaly pushed forward even more to try gain the lead but it was Down the retook the lead when O'Hagan hit over a free.  Offaly did get one last opportunity when they were awarded a free but they knew that a point was not sufficient with time running out and as the free was lobbed in, Down managed to clear the danger and claim their first victory of the campaign and seal their Senior status for 2023.

After the game Susan Earner said that her team were distraught after losing by a single point.  As she reflected on the red card, she thought the decision was harsh and it put huge pressure on her team but given how they rallied she felt they were extremely unlucky not to come away with a win.  She believed that if they had the full complement of players for the duration of the game that her team were good enough to win but unfortunately that wasn't to be on the day.

Earner and her backroom team will now have two weeks to work with their team and prepare them for a relegation playoff that will see them face Clare on July 16.