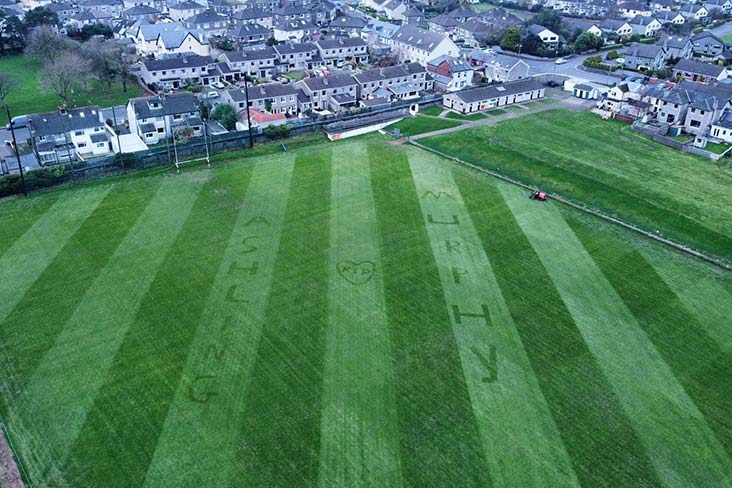 In memory of Ashling Murphy.

A groundsman at a GAA club in Cork has gone to great lengths to pay his respects to Ashling Murphy.

Ballinlough GAA head groundsman Cathal Browne mowed Ashling's name and a heart into the centre of the pitch before sharing the striking image with Cork's 96FM.

Many tributes have been paid to the 23-year-old teacher, musician and Kilcormac/Killoughey camogie player at GAA grounds and sports venues since her murder last Wednesday shocked the country.

The Antrim hurlers showed a touch of class before yesterday's Walsh Cup clash with Offaly in Tullamore by laying flowers along the canal bank where her life was taken. And just before the throw-in, players from both Offaly and Antrim formed the letter 'A' on the pitch, the idea for which is believed to have come from Offaly manager Michael Fennelly.

Just got this sent into the show @Corks96FM
'Morning Lads I did this in memory of Ashling Murphy on Ballinlough gaa pitch. Thought ye might like to share it. Cathal. Head grounds man at Ballinlough Cathal Browne' ♥️ #AshlingMurphy pic.twitter.com/gNX18Mn9Ry

The Antrim Senior Hurling team paid their respect this morning in Tullamore for Ashling Murphy and her family. Ar dheis Dé go raibh a hanam. pic.twitter.com/rkXn6PPNzt

The @Offaly_GAA and @AontroimGAA hurlers join to form the letter A on the pitch at O'Connor Park ahead of the Walsh Cup game as a mark of respect for Ashling Murphy pic.twitter.com/K5COy0QWn7