St Rynagh's shoot the lights out against Rathnure 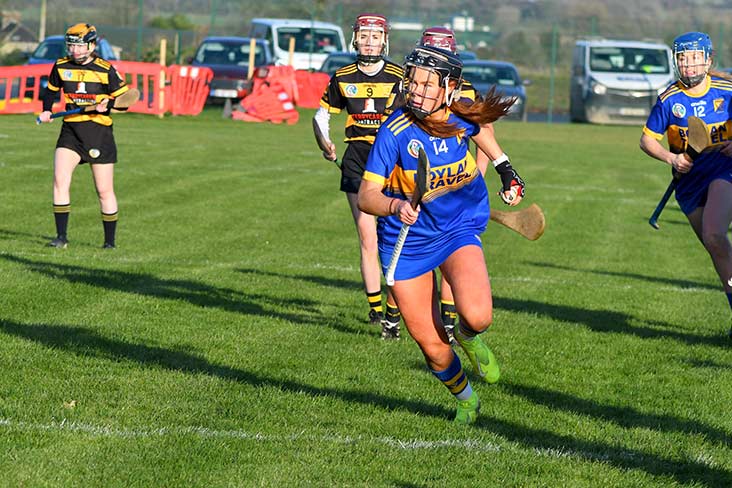 St Rynaghs travelled to Wexford on Saturday to play in the 2020 delayed Leinster Intermediate Club Championship Quarter Final. It may have been in the sunny south east but a bitter wind blew across the pitch which made for chilly conditions for players and supporters alike.

The Offaly Champions made a few changes to their starting line up that has become familiar to its supporters in the past few months. Aoife O’Regan with number 23 on her jersey started on the full forward line beside Sinead Hanamy and Siobhan Flannery. 2019’s player of the year Linda Sullivan was unavailable and St Rynaghs' Management moved Katie O’Connell to wingback and also introduced Aoife McLoughlin to the starting line up.

St Rynaghs started the brighter, immediately attacking the Rathnure defence with three points with Helen Dolan helping herself to a brace and Kate Kenny opening her account for the day.  Aoife O'Regan may have been new to the starting line but she certainly impressed and scored St Rynaghs first goal.  Siobhan Flannery also hit the back of the net, and Sinead Hanamy who was in ruthless form hit another.  There was still time left in the half for Regan to add another goal to her tally.  In what was a very eventful first half St Rynaghs were also awarded a penalty which Sophie Roche in the Rathnure goal saved from Siobhan Flannery.  Buoyed by this Rathnure ran at the Offaly defence and scored a rasper of a goal that came from outside the 21 yard line and Ellen Gilligan in the St Rynaghs goal did not get a chance to see it let alone get a hurl to it.  But the St Rynaghs contingent would have been delighted with the first half display with the scoreboard showing 1-4 to 4-8.

St Rynaghs did not have it all their own way in the 2nd half.  On home turf Rathnure were determined to hit back and kept St Rynaghs on their toes for the first 15 minutes of the 2nd half. They scored a goal straight from the throw in and followed with a point before a physical 10 minute period which culminated in St Rynaghs getting the sliotar back up the pitch and Siobhan Flannery hitting over from a placed ball.  Flannery followed this by rifling the ball to the back of the Rathnure net.  Any thoughts that the hosts may have had of a revival were put to bed when Mairead Daly hit a fantastic goal that was all her own work.

Rathnure never really threatened St Rynagh's who played like a team that were playing in the middle of a Summer's day rather than a bitterly cold day at the end of November.

The St Rynagh's Management will be delighted with their team with Aoife O’Regan and Sinead Hanamy putting in an outstanding display in the first half.  Helen Dolan, Emma Corcoran and Grainne Dolan also deserve a mention on a day when all players excelled but these three players brought the ball out of defence time after time to feed their team's forwards.

St Rynagh's will now move on to the Leinster semi final where they will travel to Carlow to play Myshal.  The teams have met previously in this competition where they produced an epic game in 2018 when St Rynaghs came out on top.  Fans of Offaly Camogie will be hoping for a similar outcome next weekend.