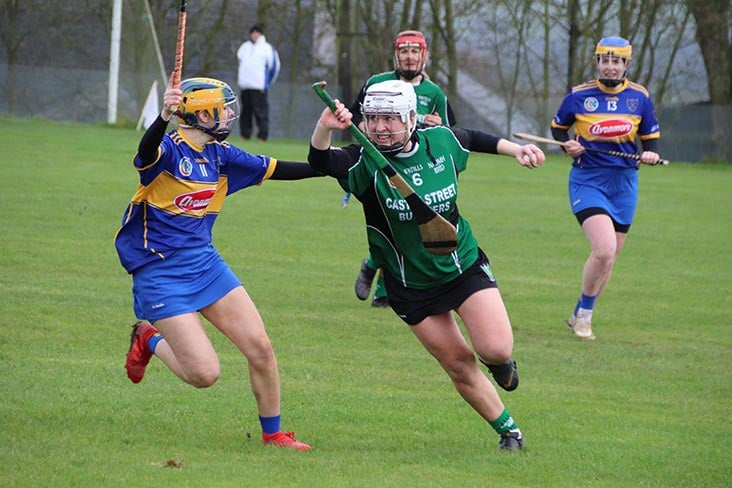 After winning last year's Junior Final, Naomh Brid have had a difficult 2021 playing in the Senior ranks of the Offaly Camogie Championship but once they finished that campaign, they set their focus on the challenge of playing in the delayed 2020 Leinster Junior Club Championship.  On Sunday they travelled to Carlow to take on Ballinkillen and after some worthwhile challenge matches the Naomh Brid girls would have travelled with some optimism.

The setting in Ballinkillen was impressive and credit to the Carlow club in how the hosted the fixture and while the Offaly girls will have been appreciative of such hospitality, once play got underway they soon set about showing that they meant business with Grace Teehan opening the scoring with a point.  Soon after Naomh Brid were awarded a free when Ballinkillen goalkeeper Laura Cummins was judged to have taken a puckout from outside her area and Teehan clinically punished the error with hitting over the resulting free.  Before 10 minutes had passed she hit over another placed ball to give her side a lead that reflected the Offaly side's dominance in that period.

Shortly after, Eleanor Treacy opened the Ballinkillen account when she converted a free which was then followed by a long range free which was deflected and ended in the Naomh Brid net.  That left the Offaly girls losing by a point at the water break which will have disappointed them as they seemed to have control of the early exchanges.  Once play resumed, however they soon regained the lead when they were awarded a penalty which Teehan converted with aplomb.  While Mary Teehan added a point for Naomh Brid they were hit with sucker punch when Ballinkillen raised another green flag courtesy Eleanor Treacy.  The Ballinkillen free taker impressed again soon after when she hit a long ranged placed ball which the Naomh Brid defence deflected over for a point.  The teams then traded points with Clodagh McCormack pointing for Naomh Brid to leave her side trailing by the minimum at half time.

Once referee Ray Kelly got the second half underway, Grace Teehan grabbed the game by the scruff of the neck and put her stamp on the game.  A point from play was followed by a hat trick of goals, one coming from a 2nd penalty for Naomh Brid.  Add in points from Mary Teehan and another from Clodagh McCormack and the score line reading 2-4 to 4-8 at the 2nd half water break which reflected Naomh Brid's dominance.

They will now proceed to the semi finals of the Leinster Junior Club Championship when they take on Raharney next Sunday.  The Westmeath team had an impressive result in their quarter final when they beat Portlaoise 6-16 to 0-0, a result that will no doubt have caught the eye of the Naomh Brid Management team.