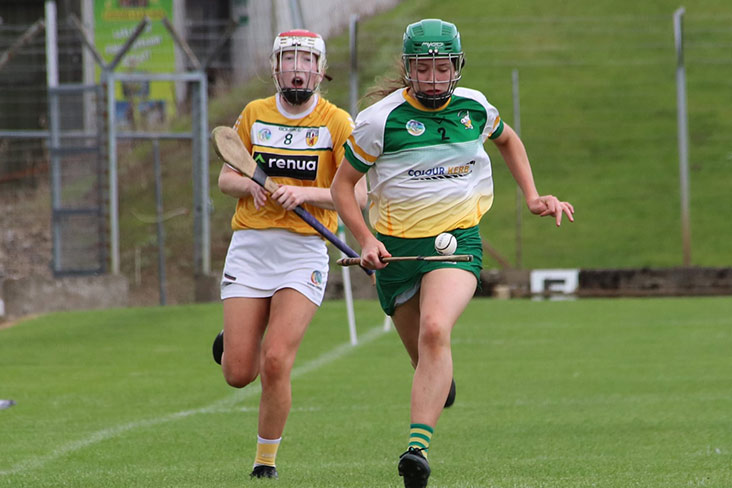 After a thrilling draw two weeks ago, both teams travelled to Pairc Tailteann in Navan for the All Ireland Minor B Final replay on Sunday.

The match was played in a mixture of conditions with the sun shining brightly at the start of the game but there were some heavy down pours of rain in the second half which would lead to conditions being challenging for both teams.  While there were only 1000 tickets available for the match it seemed like there was at least double that in attendance just from Offaly as the Faithful followers travelled in optimism to support their team.  On arrival they discovered that there was one change to the starting Offaly team with Hannah Reilly replacing Grace Leonard.

Once the match got underway, Antrim quickly established control of the game and hit the opening score in the first minute.  They went on to tag on a further 3 points before Offaly opened their account thanks to a free converted by Clodagh Leahy after 15 minutes.  Offaly’s forward Cayla Fletcher retained her full forward position after being moved there in the drawn game and had three goal opportunities but was denied by Orla Donnelly who was in top form in the Antrim goals.  One of Fletcher’s shots was deflected over the bar by Donnelly for Offaly’s second point and she repeated this a minute later when Clodagh Leahy had to be satisfied with a point to leave Antrim leading by the minimum.  But that was to be as close as Offaly would get to Antrim as they added 3 points to their tally.

Offaly’s goalkeeper Leah Gallagher was in excellent form pulling off some outstanding saves to deny Antrim, however the Saffron girls’ pressure eventually paid in the 24th minute when they finally finished to the Offaly net.  The onslaught on the Offaly defence continued and Antrim’s tails were now up and they added another point before Gallagher was beaten again and the scoreboard was looking ominous for the Offaly girls.  They did however finish the half well adding 3 points before the break with one of the points coming from a Clodagh Leahy free which she did well to compose herself and convert after receiving some treatment for a very heavy knock.

Declan Fogarty and his management team had a sizeable task on their hands at the half time break to lift their team and prepare them for the second half but when play resumed the Offaly got the opening when Leahy converted a 45, but Antrim went through the gears again adding on another 3 points to their tally.  While Cayla Fletcher replied for Offaly, Antrim drove a dagger into the heart of any Offaly hopes when they hit their third goal to leave the scoreboard reading 3-11 to 0-8 at the 2nd half waterbreak.

If anyone thought that the Offaly girls were going to leave Navan without putting up a fight they would soon be proved wrong as when play resumed the Offaly forwards hit a purple patch and opened the Antrim defence on a number of occasions.  They finally got their rewards when Clodagh Leahy hit the ball hard into the Antrim net.  This was followed a minute later by Sinead Hanamy hitting the ball low past Donnelly in the Antrim goals.  Antrim replied by hitting a point to try stem the Offaly momentum but the Faithful girls were rewarded for a 3rd time when the outstanding Faye Mulrooney hit home and now there were just 5 points between the teams.  Unfortunately, that was to be the end of the Offaly scoring while Antrim would tag on another two points to seal their deserved victory.

There is no doubt that Antrim were the better team and deserved All Ireland Champions but the Offaly management team will take heart in the fightback that their team showed when another team could have lay down an accepted the Antrim dominance.  Given that a number of the Offaly girls are eligible to play for the minor team next year, they can look forward to next year’s championship with optimism.  There will be members of the Under 16 All Ireland Final team coming into the Minor squad in 2022 the Offaly management can certainly look forward to next year’s championship with great hope.