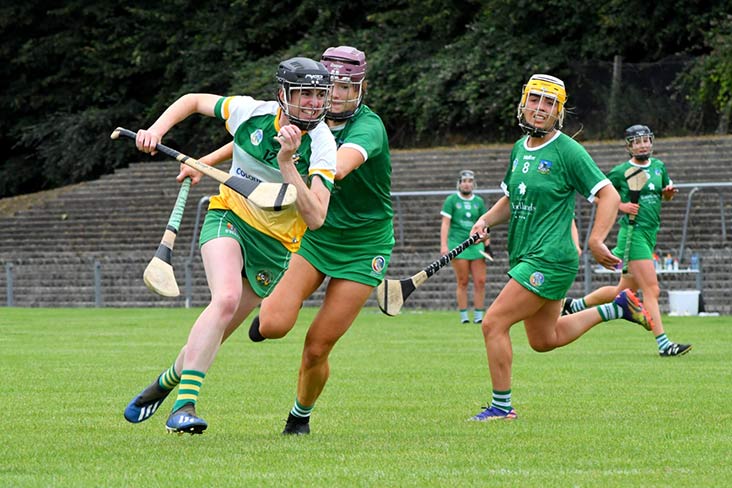 Offaly's Orlagh Phelan in possession against Kildare in Banagher

Susan Earner and her management team made some noteable positional changes from the Wexford game, moving Orla Kirwan into the wing forward position from midfield, the in form Sarah Walshe partnering Ashling Brennan in the centre of the pitch. Amy Byrne came in from the bench at wing back and Sharon Shanahan moving to the corner back position. The biggest surprise was a change in goal keeper for Offaly with Kinnitty’s Eleanor Clendennen replacing Birr’s Mairead Jennings.

Offaly started the better of the teams with a two frees from Mairead Teehan and a point from Sarah Harding from play in the first 5 minutes, however Limerick hit back with 3 points of their own and mirroring Offaly by hitting two frees and Rebecca Delee scoring from play to leave the score at 0-3 each and the first half water break.

Once play resumed, Offaly came back with a great point from Sarah Walshe before both teams had goal opportunities but it was Offaly’s Orla Kirwan who scored a fantastic goal for Offaly.  Limerick went on to dominate the remainder of the first half and tagged on 4 points to their tally to leave them leading by the minimum at half time.

The second half continued with Limerick growing in confidence and put three more points on the board before Offaly’s experienced substitution Siobhan Flannery scored a point from play. Going into the last quarter Limerick were leading by 4 points and  Offaly, who were playing Michaela Morkan as a sweeper, changed tactic and moved her to the centre forward position. The change had an impact immediately with Morkan involved in an attack that resulted in a free and a crucial point for her team.  She was again instrumental in her team’s next attack which Mairead Teehan brilliantly finished to the net and suddenly the teams were on level terms.  The momentum was now with Offaly and they were pushing hard with the home team giving their all.  However it was Limerick who hit the next two points but Offaly refused to lie down and equalised again with points from Flannery and Morkan.  The game was now really in the melting pot and the outcome could have gone either way at 60 minutes but Limerick hit two late points to get them over the line and secure their senior status for 2022.

Offaly can certainly take heart for their never say die attitude and a draw match might have been a fair result but it was not to be.  Eleanor Clendennen performed well and was solid between the posts for her team.  Michaela Morkan continues to be outstanding for Offaly, after all the mileage she has given over the years and still plenty left in the tank.

As a whole Offaly Camogie team can hold their head high after a spirited performance from this panel.  They certainly have the talent to win these matches and maybe all they are missing is belief.

When asked for her thoughts, Susan Earner was delighted with her team’s start to the game and their work rate and determination.  She felt the game could have gone either way and she and the team are extremely disappointed to be in the relegation fight.  They now have a difficult fixture ahead where they will meet Down in the relegation semi final.  Earner says she hopes “the girls pick themselves up now to keep themselves at the top level with the top teams in the game”.