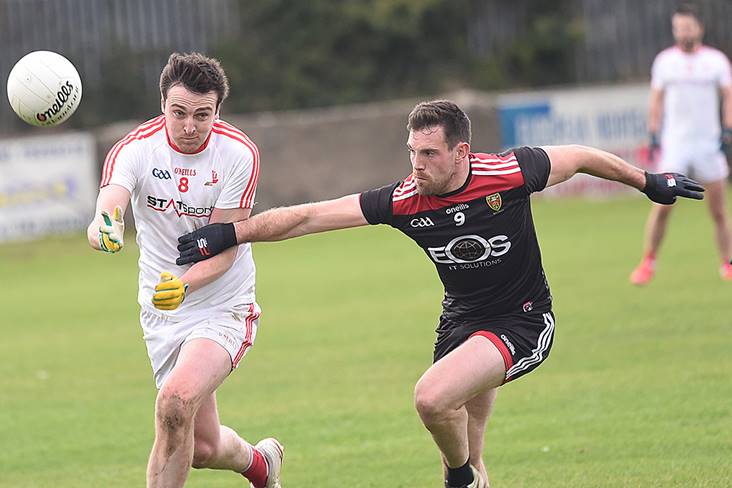 Louth's Tommy Durnin with Niall Donnelly of Down.

Leitrim have been relegated to Division 4 of the Allianz Football League along with Louth after a 0-15 to 2-11 defeat to Tipperary in Carrick-on-Shannon.

Goals in either half from Kevin O'Halloran and Liam Casey condemned Terry Hyland's men to the drop after they were forced to concede a walkover to Down last weekend. Tipp led by 1-5 to 0-7 at the break, but Leitrim were on course to pull off the great escape when points by Conor Dolan and Cillian Dolan put them two up after the restart.

However, two points from substitute Liam Boland in as many minutes brought Tipp level before Casey's goal secured their Division 3 status.

Derry, who were promoted from Division 4 last year along with Leitrim, missed out on another promotion under the head-to-head rule. They withstood a second half comeback by Offaly in Tullamore to prevail by 1-12 to 1-10, but defeat to Down earlier in the campaign ultimately cost them.

In a poor first half at Bord na Mona O'Connor Park, the Oak Leafers built up an 0-8 to 0-1 lead before Aaron Leavy's 31st minute goal brought Offaly back into contention. However, Ethan Doherty immediately replied at the other end to send the visitors into the break with a 1-9 to 1-1 lead.

With the Rhode pair Anton Sullivan and Niall McNamee making a huge impact off the bench, John Maughan's men battled back to within two points and could have snatched an unlikely win if they hadn't been reduced to 14 men for the last 10 minutes after wing back Eoin Carroll received a second yellow card.

With Down already promoted after Longford decided not to fulfil their last fixture against champions Cork, Louth sprung a surprise at Dowdallshill where they prevailed by 3-14 to 0-16 to pick up their first points of the campaign.

Conall McKeever raised a third green flag after the restart as the Mournemen - who handed six players their first league starts - suffered what was only their second defeat of the campaign.