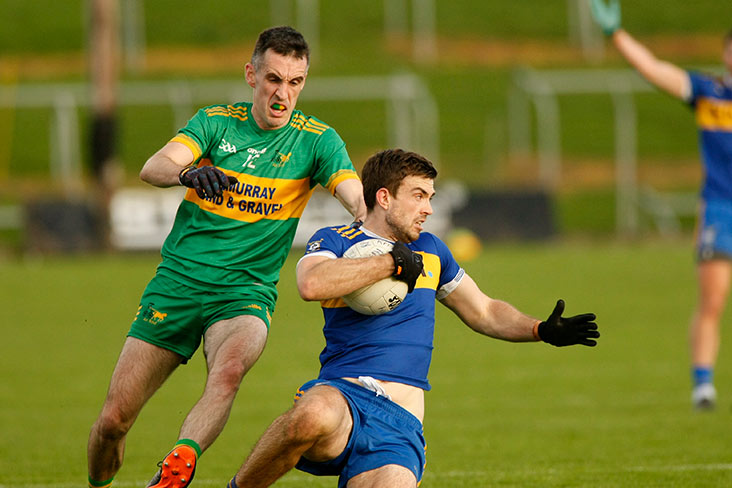 Meath's Ratoath are through to the Leinster Club SFC semi-final for the first time with this spirited win over an experienced Rhode at Pairc Tailteann on Sunday.

Just as in their Meath SFC final win over Summerhill, David Brady's men showed admirable character to eke out a win here, their first at senior provincial level.  Ratoath are the first Meath team to defeat Rhode in this competition, managing what Skryne, Simonstown and Navan O'Mahonys failed to do in the past.

Having found themselves two points down soon after half-time in this gripping and sometimes combustible contest, Ratoath registered five points in a 15-minute spell to forge a narrow lead they took to the end.

They managed the loss of Eamon Wallace to a 47th minute black card conceding just two points in his 10-minute absence. Rhode lost Anton Sullivan to a 63rd minute black card while brother Paraic Sullivan received a similar sanction in the first-half.

As this very competitive fixture threatened to boil over in the final quarter more sanctions could have been administered by the Laois official.

The sun made it difficult to identify players on both sides, with the Rhode jerseys more problematic in that regard.

Niall McNamee's accuracy with both feet were responsible for all but two of Rhode's tally. Aaron Kelleghan - son of Paschal, who guided Ballinabrackey to a Leinster Club JFC title during his time with the Offaly border club - was another while midfielder Conor McNamee's 18th minute effort gave his side the lead for the first time.

What the fixture lacked in quality it more than made up for in intensity - with a semi-final date on Saturday week at Croke Park on offer. Ratoath led 0-10 to 0-7 in 50th minute before two Niall McNamee frees trimmed the Rhode deficit to the minimum.

Some of referee Seamus Mulhare's decisions angered the Rhode contingent. Having appeared to be on the receiving end of tough calls in the opening half, Ratoath may have got the benefit of the doubt late on.

Ratoath's better spread of scorers was a significant boost to their cause.

Rhode had whatever advantage the wind and sun offered in the opening half. Points from Keith McCabe and Daithi McGowan (free) got the Meath champions off to a positive start.

Two points down with 14 minutes gone, Declan Gorman's side got off the mark through the first of Niall McNamee's four first-half frees. The same player leveled matters midway through the half.

Rhode lost lost Paraic Sullivan for ten minutes to a black card before the end of the first quarter.

Conor McNamee became Rhode's sole first-half scorer from play in the 18th minute when giving his side the lead for the first time.

Eamon Wallace was central to two of his side's scores that arrived around the 20th minute. Having placed McCabe for his second score he then restored the Ratoath's lead.