Club wins four cups after going 34 years without winning any 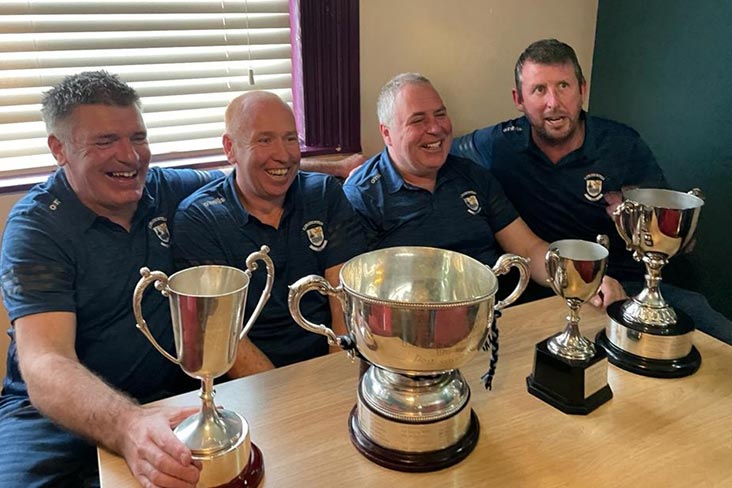 The Ballinagar management team of Adrian Daly, Keith Ryan, JJ Malone and Ken Beatty with the spoils of victory.

A small GAA club in Offaly is in dreamland after finishing the season with four trophies.

After going 34 years without winning an adult title of any form, Ballinagar completed an extraordinary quadruple in Daingean last Saturday when they recorded an emphatic victory over Edenderry in the JFC 'C' final. The success comes after they also claimed Division 4 and Division 5 League titles as well as the big one - the JFC 'A' crown - in the past few months.

Indeed, Ballinagar went 28 games unbeaten in all competitions. What they have achieved this year is remarkable considering their only previous successes were a MFC title in 1932 and a JFC ‘A’ title in 1988.

“They’ve worked hard since we started training on January 18th. They spent eight weeks in the gym. It took them a while to adapt to our style of play, but once they did there was no stopping them. I’m thrilled,” said manager Keith Ryan, who hails from the Round Towers club in Kildare.

“It’s great for such a small village. Coming from a big town like Kildare and coming down to see what’s in the village – a pub, a shop and a church. That’s it. It’s a credit to the lads.”