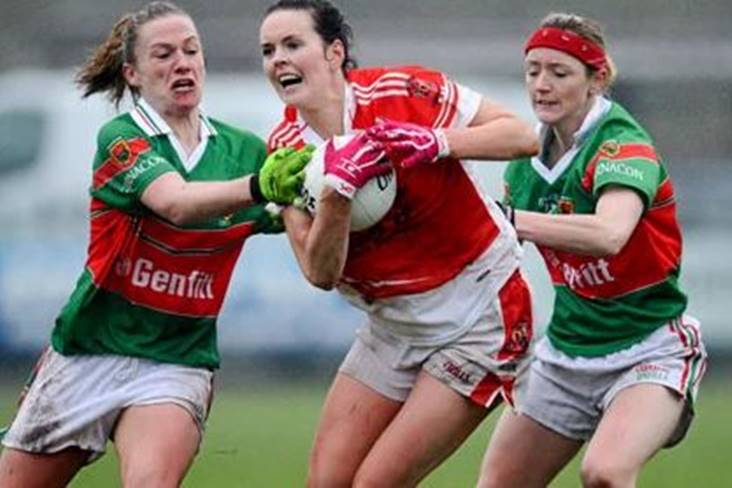 One of the most innovative developments in Ladies football in the last decade has been the introduction of Gaelic4Mothers&Others, which aims to attract women back to the game.

You might imagine that 35-year-old mother of four Amanda Finnegan would be a prime candidate for the G4MO, but instead she is plotting a way to a fifth All-Ireland Senior Club win with Monaghan side Donaghmoyne.

Playing under her maiden name of Amanda Casey, her ten seasons representing Monaghan on the inter-county scene came after the birth of her daughter Emma, who is now 15.

In between the birth of Ted, who is four since April, and daughter Feren, who turns two next week, Amanda managed to win her fourth and fifth All-Ireland Senior Club titles.

She was captain for the 2016 glory against Foxrock-Cabinteely, but when Daithí, the latest addition to her and Pete’s family arrived eight months ago, she finally believed that her footballing career was over. Now, less than a week after winning her 11th Ulster Senior Club medal, Finnegan is already planning for next season.

“I hadn’t planned on going back, that was it I was finished, but it’s very hard not to go back especially when you have a successful team like Donaghmoyne,” said Amanda.

“The girls would be on to you, keeping in contact, not putting pressure on you but all along they all thought I was going back, even though in my head I wasn’t.

“It is hard to get out to training, but the Donaghmoyne girls are great. They told me: ‘When you’re here, you’re here. There is no pressure. If you can’t make it for weeks on end it’s fine. You’ve done your 20 years of slogging and training.’

“Hearing that from the girls makes it really easy for me. I love training and they know if I can be there I will be. Having that understanding was vital.”

A gym instructor by trade, Amanda was eager to maintain her fitness during her pregnancies, which in turn enabled her to make a quick return to training after her children were born.

While her latest return to the red shirt didn’t materialise until the middle of the summer, she had already put some training in the bank after Daithí’s birth.

“I would have went back training myself after about two weeks, just out to do a bit of running and a couple of classes.

“One day I said: ‘you know what I’ll go to one training and see how I feel’. I thought I wouldn’t be fit to play or fit to keep up with them but it hasn’t been too bad.

“That was when Daithí was around four months old. At the start I did it for myself, for my head just to get out and do a bit of training. But it sucks you back in.”

After years of commitment to club and county the Finnegans missed out on a few family holidays, and believing she was in full retirement they made plans for this year.

As a result she didn’t return to the team until their county final win over Emyvale, while she impressed hugely and bagged a goal from her midfield berth in the Ulster semi-final victory against Bredagh, which set up the final against Termon.

“Sunday’s game was our 16th Ulster final in a row and we lost four. I wasn’t there for one of those wins so I have 11 Ulster medals. The numbers are unreal. Maybe you don’t appreciate as much as we will in years to come. We’ll look back and say: ‘Oh my God, how did we do it?’

“The bones of the team is there for the last 15 years, but (in) the last two years girls like Rosemary Courtney and the Garland twins [Amy and Lauren] came in, Louise Kerley and Eimear Traynor too, they are all around 17 or 18. But we need that because we’re not going to be around forever.

“After last weekend’s win the team went out and celebrated. I didn’t actually get to go out because one of my wee ones wasn’t feeling well with a vomiting bug.

“I was happy with the win, but they all had a good night. We were back training on Tuesday night; I need something to give me an edge on them anyway, it doesn’t get any easier.”

Focus has already switched to their semi-final opponents tomorrow week, and Donaghmoyne have been handed the toughest possible draw with an away semi-final against reigning All-Ireland champions Mourneabbey. Familiar opponents for the Monaghan side.

“It’s going to be tough going down into their home yard for an All-Ireland semi-final. It’s a missive difference having that home semi-final, it’s a big thing to travel to Cork, but we’ll give it a good shot.”

So is 2020 the year that Amanda finally takes a well-earned rest?

“I will probably play next year,” she smiles.

“It’s great for the head. When you’re at home with the kids all day it’s great to get out and see the girls and have the craic. You come home with a nice clear head.

“I’m going to play basketball for the winter too and that will keep me ticking along. I haven’t played that for six or seven years. I haven’t played as much football as I’d like to have had at this time of the year either, but I had a baby this year, so I can use that excuse for another while.”