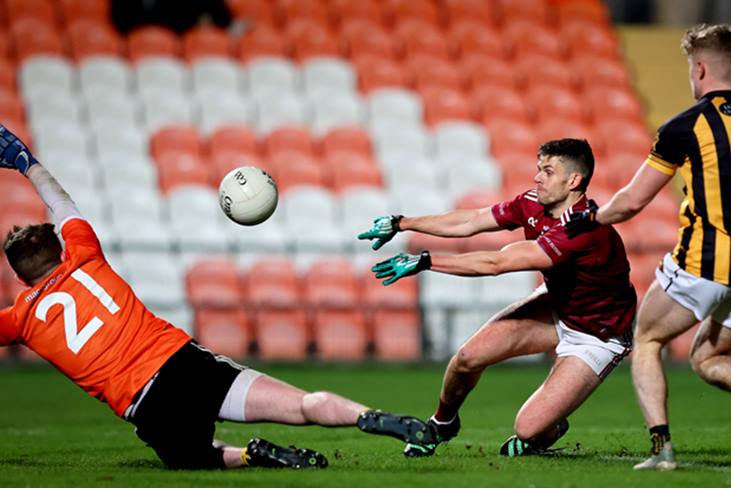 Ballybay upset the odds at the Athletic Grounds tonight to send Crossmaglen Rangers crashing out of the Ulster club senior football championship in its opening round.

An early second-half blitz paved the way for the Monaghan champions’ 2-11 to 1-8 victory in Armagh, where Shane McGuinness and Aaron Toner hammered in the goals for the visitors.

Veteran Paul Finlay was outstanding over the hour for the winners and kicked the last two points of the first-half to keep them in contention.

McGuinness hit the net just four minutes into this provincial opener before a point from Cian McConville and a Rian O’Neill goal had Crossmaglen in front as many minutes later.

The home side looked like pulling away after points from Caolan Finnegan, Jamie Clarke and Ronan Fitzpatrick had them three in front.

However a brace of points from the evergreen Finlay (one free) left it at 1-5 to 1-4 come the interval, with Crossmaglen’s Dara O’Callaghan picking up a black card just before the short whistle.

Aaron Toner with a Ballybay goal and Crossmaglen are in trouble.

Live now on RTÉ2 and the RTÉ Player. pic.twitter.com/3VfBUOGO36

The Farney men men hit the first three points of the restart via Ward, McGuinness and Finlay (free) and they’d hit the jackpot in the 38th minute with a Toner goal that knocked the stuffing out of the Orchard champions.

From there to the finish, Ballybay were able to hold their opponents to just three points while scoting three of their own and it sealed a six-point victory.

Up next for the Monaghan champions is All-Ireland champions Kilcoo tomorrow week, when their joint-manager Jerome Johnston will be plotting against his home club and a side which consists of three of his own sons.

Earlier in the day, Corduff (Monaghan) booked their place into the quarter-finals of the Ulster club intermediate football championship thanks to a 1-9 to 1-8 win over Shane O’Neills of Armagh.

In the Ulster club JFC, Tyrone champions Stewartstown were comfortable 2-19 to 0-5 winners over Teconnaught (Down), while the northern province’s club intermediate hurling championship saw Eire Og Carrickmore (Tyrone) and Liatroim (Down) advancing to its semi-final stages with wins over Fermanagh’s Lisbellaw (2-23 to 2-18, AET) and Castleblayney of Monaghan (3-22 to 3-15), respectively.