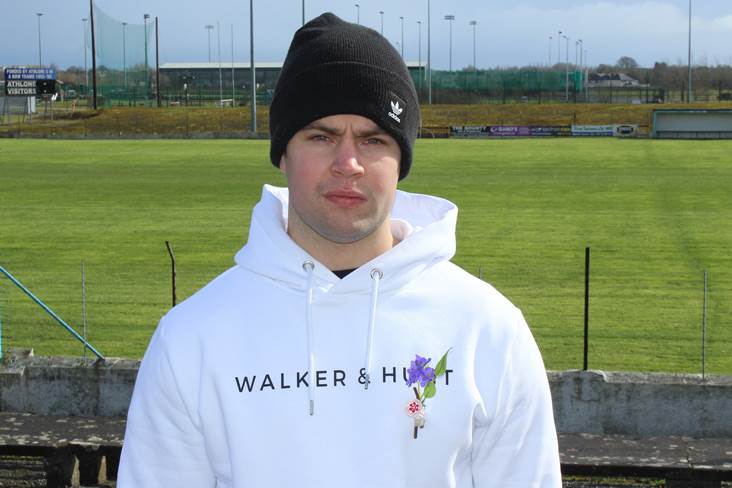 Retired Westmeath footballer John Egan who is a kidney patient

John Egan is just 30, a former intercounty footballer and now hoping to get a new kidney. He tells his story in support of Organ Donor Awareness Week which is being organised by the Irish Kidney Association.

“My name is John Egan, from Athlone, Co Westmeath. I work as a Senior IT recruitment Consultant for Solas IT (based out of Dublin). I have been working with Solas IT for 7 years. Over 15 years ago I was diagnosed with IGA Nephropathy. This is a disease that unfortunately has no cure at the moment and causes long term kidney damage and in the end, kidney failure. The initial diagnosis came when I began to pass urine in my blood. That weekend I felt like I had a mild flu and temperature, I played a match for Westmeath u16s and took a heavy blow to my kidney area. I believe that this impact sparked the passing of blood in the urine the next day. At first, I thought it might have been a small kidney infection that would pass, but once blood continued to pass into the next day I went to MIDOC. From MIDOC I was sent to Ballinasloe hospital for a 3-4 days and then on to Merlin Park Galway where I spent nearly 3 weeks. After a biopsy was completed, I was then diagnosed with IGA Nephropathy.

“From there, I was put on a course of steroids and medication to help with blood pressure and kidney function. I was monitored by & working with Dr Donal Reddan in Galway Clinic for several years after being released from hospital. It took me about 1 year to get used to the impact the medication had on my body which impacted my energy levels day-to-day and sports performance. Kidney function began to plateau after some time, and steroids / medication were reduced. As time went on and I started college, Kidney disease was never in my thoughts at all. Even though I knew I had kidney issues and they didn’t function correctly, I never realised that it would end in Kidney failure, dialysis and transplant.

“I played with Westmeath at U16, Minor & U21 level before progressing to the senior team, I completed two J1s and graduated college with health issues not even in my thoughts. It was not until 2018 when I did a pre-season medical with Westmeath GAA that the kidney problems I had came to light again. Blood tests were taken as part of the medical and it showed that my kidney function had dropped to below 30%. Dr Jerry Flynn (Westmeath GAA Doctor and now my GP) referred me on to the Midlands Regional Hospital in Tullamore for more tests where where I then became a patient of Dr Eoin Bergin (a kidney specialist). Throughout the 2018 season I noticed changes again in my energy levels with fatigue and cramping. I was then put back on medication that impacted my ability to play at inter-county level. I felt jelly-legged constantly and just did not have the energy to perform. I actually decided in the middle of a game that year that this was going to be my last year playing for Westmeath regardless. Once Westmeath finished for the season, I did suffer a bad knee injury to an already bad knee. After discussing with the physio my options for football, future knee issues and the impact my kidneys were having on my performance and ability to play, I decided to retire from playing at 28. Since then, I have moved into the management side of football as it is an area I have a big passion for. Also I wanted to give back as much as possible to Athlone GAA. Since 2018 I have been part of the Athlone GAA senior football management panel and I also helped out with Westmeath U15s in 2019.

“In 2018, Traci and I also purchased a house. We had a number of issues with life-cover etc due to my health issues and the process took far longer than expected. This was a difficult time for us as we were not aware than my health issues would have such an impact on mortgage approval and it had never been mentioned to me by medical or financial advisors. Now I am in end stage Kidney failure with a Kidney function of around 9% as well as other issues including worrying potassium levels. I suffer from various symptoms of kidney failure including cramping, swelling, fatigue, gout and just feeling unwell in general. On Tuesday 18th of March I will attend Tallaght Hospital to begin the process of starting dialysis, they then hope to schedule a surgery to implant a catheter in to my stomach to allow for me to commence a form of home dialysis called Peritoneal. I will meet the Surgeon and Transplant team in Beaumont Hospital in early April and soon after I will be officially on the transplant waiting list. These appointments have taken time in coming round as I was expected to be listed in 2020. Due to Covid 19, transplants and appointments have been put back months which is very frustrating.

“I was due to be married in December 2020 to my Fiancée Traci but we decided to put this off due to Covid restrictions. With this cancellation,  I hoped to be in a position to have started dialysis, being fortunate to have found a suitable kidney donor and to be recovered in time for our rescheduled wedding 2021. However, this looks highly unlikely due to delays in being officially accepted on the transplant waiting list and the impact of Covid on the number of transplants being performed. It would be a wonderful outcome if I was successfully transplant and be able to fully enjoy our wedding in December.

“For me aside from the symptoms and general unwellness which I feel nearly all of the time and the diet and fluid restrictions, the most difficult part of everything is the unknown and inability to plan the short to mid term future in terms of marriage, kids, travel, etc. Over the course of this health journey, I have always received kindness and love from family, friends, work colleagues and the GAA community. Without the support of my fiancée Traci, my mam and dad, sisters Niamh and Dee and all my friends this process would have been very difficult.

“People have stepped up to the plate and offered help with anything I need, big or small. I was also like to say thank you to Dr Jerry Flynn, James and the team in Kilbeggan Medical Centre and Eimear, Edel (my dieticians), Sani (Renal Nurse) and Dr Bergin in Tullamore, who have been there for me medically during this process. A word of thanks also to my colleagues and managers in Solas IT who have been very supportive and who have given time of to me no-questions-asked for appointments over the last 7 years. A big thing that I would hope to get from this, apart from getting back to some sort of health is to spread the word about the importance of organ donation in Ireland. Organ Donation is something every household should talk about, and sign up to be a donor by getting a donor card as it might save someone’s life.”

The Irish Kidney Association (IKA) looks forward to celebrating the annual Organ Donor Awareness Week 2021 with 70 public sites around the country being lit up in green from Saturday, 27th March until Saturday, 3rd April 2021.

This year’s awareness campaign is built around the theme #Life is a Gift Pass it On and Share your Wishes. The key message is that the public can play their part in supporting organ donation for transplantation by ensuring that their families know their wishes. i.e., have the conversation #have the chat.

Individuals who wish to support organ donation are encouraged to keep the reminders of their decision available by carrying the organ donor card, permitting Code 115 to be included on their driver’s licence and having the ‘digital organ donor card’ APP on their smartphone. Organ Donor Cards can be obtained by phoning the Irish Kidney Association on 01 6205306 or Free text the word DONOR to 50050. You can also visit the website www.ika.ie/get-a-donor-card or download a free ‘digital organ donor card’ APP to your phone.