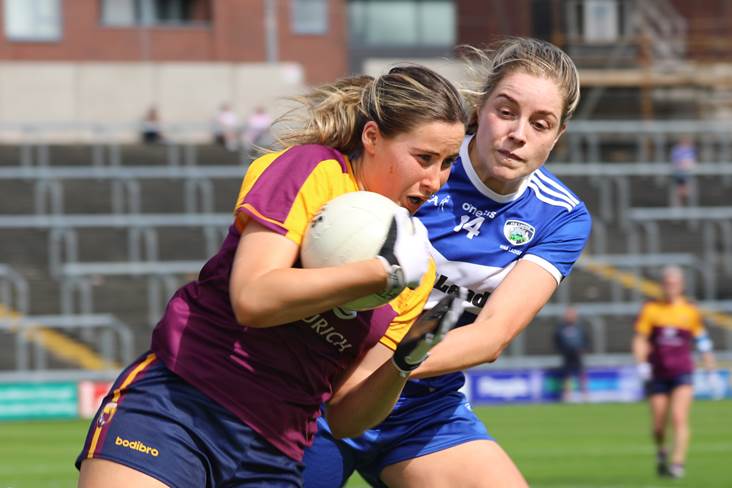 Tara Doyle hit 2-6 as reigning Leinster IFC champs Wexford recovered from an eleven point deficit against Laois to qualify for the 2022 TG4 Leinster IFC Final next Sunday. Wexford were trailing by 2-5 to 4-7 at the break, but 2-5 unanswered in the final quarter forced extra time.

In extra time, Wexford got the brighter of the starts and with Tara Doyle and Amy Wilson on target from placed balls, they overcame a strong Laois team to book their place in next Sunday’s decider against Kildare.

While Wexford got off to a perfect start through a Bernie Breen point straight over the black spot, it was Laois that started stronger and Laura Marie Maher made no mistake when she finished low to the bottom left corner of Eimear Barry’s net. Maher followed this up with a point a minute later and Laois extended their lead through an Erone Fitzpatrick point and two from the boot of the impressive Mo Nerney to push them into a six point lead.

Wexford brought the gap back to three points when Aisling Murphy found the net, but the Laois attack were on top of their game and on the resumption, Laois got their second goal through Mo Nerney. Fitzpatrick added a point shortly after, but this was cancelled out by a terrific long distanced effort from Aisling Murphy at the other end.

Playing with the aid of a difficult breeze, Nerney added a point before Ellen Healy playing with number six on her back, popped up on the Wexford 21 yard line and found the net with her right boot for Laois’ third goal.

Caitríona Murray and Mo Nerney swapped points before Wexford upped the already frantic pace and added points through Tara Doyle (free) and Ellen O’Brien. Wexford could have gotten in for another goal when Doyle saw her effort smash off the Laois crossbar and the Laois defence got the ball away to safety.

Eva Galvin hit Laois’ fourth goal when Jane Moore and Anna Healy combined wide on the left to find a waiting Galvin and she buried it without hesitation. However, not to be outdone, Tara Doyle grabbed Wexford’s second goal, and the sixth of the half, to leave Lizzy Kent and John Nolan’s team eight points adrift at half time.

Laois got off to a quick start as the second half got underway with points from substitute Emma Lawlor and two from Mo Nerney. The first of Nerney’s points there could have been a fifth Laois goal, however Sarah Merrigan did brilliantly, and it went over the bar.

Wexford continued to take the fight to the Laois defence and were rewarded when substitute Emma Tomkins pointed before Tara Doyle also converted from play.

A brace of Tara Doyle frees reduced the gap back to seven points before Amy Wilson made it a six point game. With advantage firmly in Wexford’s favour, they continued to run at the Laois defence.

The impressive Tara Doyle grabbed goal number three for Wexford and while Laois tried to get a score, it was Wexford that hit first and Orlagh Kehoe popped up, burying the ball past Laois goalkeeper Eimear Barry to ensure extra time would be played. The sides finished level at 4-10 apiece at full time.

While Erone Fitzpatrick converted a free as extra time got underway, Wexford took firm control of the fixture and two points each for Tara Doyle and Amy Wilson, alongside one from Orlagh Kehoe pushed Wexford into a 4-15 to 4-12 extra time interval lead.

Laois battled back in the second half of extra time and Mo Nerney’s two points reduced the gap back to a single score. With the game once again on a knife edge, Bernie Breen replaced an injured Aisling Murphy and the five time nominated All Star put Wexford back into a two point lead.

Laois did have an opportunity late on to get back into contention, but Mo Nerney’s free was saved by the Wexford defence on the line and scooped away just as the full time whistle went to send Wexford back into the Intermediate Final.

Subs: E Lawlor for Maher, A Havill for Galvin, S Farrelly for Williams, A Moore for Fitzgerald.

Sub: A Cullen for Kearney, A Walsh for Halligan, E Tomkins for Hamilton, A Wilson for Breen, C O’Brien for E Tomkins, B Breen for Murphy.