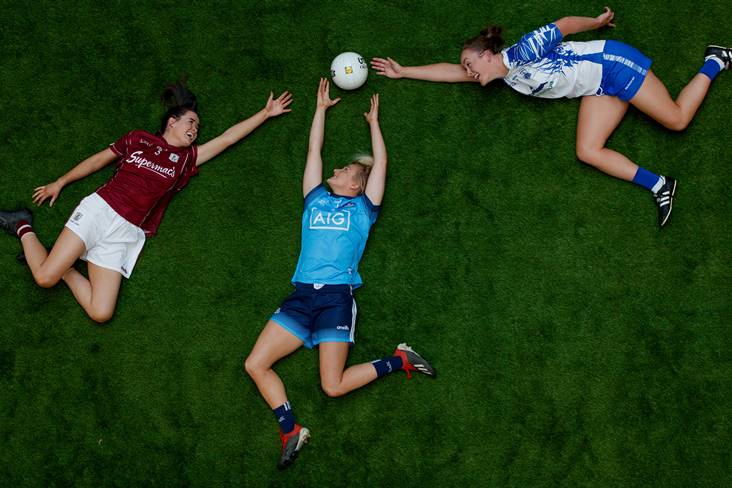 THE race for top-two finishes and Final places in all four Divisions of the 2020 Lidl Ladies National Football League intensifies this weekend – with Dublin and Cork preparing for a tussle under the lights at Croke Park.

The TG4 All-Ireland Senior Champions and Lidl NFL Division 1 holders clash as part of a double-header at GAA HQ – one of four over the course of the League weekend.

Dublin and Cork renew acquaintances in Saturday’s sole top-flight fixture – with the other three Division 1 ties down for decision on Sunday.

In Division 2, Monaghan and Kerry will be aiming to preserve 100 per cent records – while the Division 3 Leinster derby between Kildare and Wicklow will be streamed LIVE on the LGFA Facebook Page: http://bit.ly/2OvUJ2D

When the sides last met, Dublin prevailed at GAA HQ in the 2019 All-Ireland semi-final, in front of 10,886 spectators.

Earlier in the season, Cork eventually had the measure of Dublin in a gripping Lidl NFL Division 1 semi-final, a tie that was played out in sweltering conditions at Kilkenny’s Nowlan Park.

These two are likely to be in the hunt when League and Championship honours are handed out again this year – and both will be eager to strike an early-season psychological blow.

Dublin have three points from four to date, while Cork are chasing a third win on the spin.

Tyrone are fresh from an impressive victory over Armagh last Sunday, while Clare have lost their opening two fixtures.

Tyrone will now look for a second successive win to keep pace with leaders Monaghan and Kerry, who have registered maximum points so far.

Clare lost by 12 to Armagh in Round 1, before suffering an eight-point reverse to Monaghan last weekend.

The Banner County need to start picking up points – and fast – to avoid a relegation battle.

Donegal bounced back from their opening day loss to Mayo with a real smash and grab victory over Waterford last Sunday.

Full forward Emma McCroary was the goal hero at the death as Donegal emerged from Fraher Field in Dungarvan with a two-point win.

The challenges don’t get any easier in a competitive top flight, as Donegal prepare to welcome last year’s beaten League and All-Ireland Finalists Galway to Letterkenny for the first game of a double-header.

Galway were shocked by Waterford in their opening fixture but Roisin Leonard’s hat-trick of goals helped them to comfortable victory over Westmeath in Round 2.

Donegal boss Maxi Curran has named an unchanged side for this game, while his Galway counterpart, Tim Rabbitt, has called in Noelle Connolly and Ríona Ní Flatharta for starts.

The Lake County also stayed up but they face a real battle to avoid the drop this time.

Westmeath have suffered two defeats from their opening two fixtures, while Tipp gained what could be a precious point away to Dublin in Round 1, before losing to Cork last weekend.

Both sides will hope to return to winning ways after defeats last weekend.

A win for either side would revive hopes of a top-two finish – and there’s potential ground to be made up on a weekend when Dublin and Cork lock horns.

Mayo boss Peter Leahy has made four changes to the side that started against Dublin – while there are three changes for Waterford.

Rejuvenated Monaghan have started life in Division 2 like a train, claiming two comprehensive wins from their first two games.

Relegation hurt the Farney County last year – but they look like a team on a mission right from the start of the 2020 campaign.

Meath are one of four teams locked together on three points – and three behind Monaghan and Kerry.

Monaghan will feel that this is a chance to see off potential promotion rivals – but Meath will hope for a big early crowd at Páirc Tailteann, in the first game of a double-header at the Navan venue.

Two games, two wins for Kerry, who are the early pace-setters alongside Monaghan in Division 2.

Armagh opened with intent against Clare but they lost out to Ulster rivals Tyrone in Silverbridge last weekend.

These sides clashed at the semi-final stage in Division 2 last year, when Kerry came out on top.

Another victory for the Kingdom would put them in an excellent position for a top-two finish and Final place – but an Armagh win would really open up the promotion race.

Cavan were gutted to lose by just a point to Kerry in Round 1 – but they hit back to claim a very good win against Meath last weekend.

A defeat for either side could already leave them with surely too much to do in the hunt for the two Final places on offer at the head of affairs.

Wicklow, curiously, have drawn both of their games so far, and will be hoping to finally claim a first win of the season.

Louth have played just the one League game this year to date – and won it – while Limerick have won one and lost one of their opening two games.

Limerick won by a point against Louth in the League last year – but these two counties were semi-final runners-up when Division 4 reached the knock-out phase.

Leitrim scored a huge win over Derry in their sole outing to date in Division 4.

For last year’s beaten Division 4 Finalists Antrim, it’s been a tough start, and they’re pointless from their opening two games.

Leitrim will fancy their chances of another win when they welcome the Saffrons to Ballinamore – and the Ulster side need to improve if they’re to have any hope of contesting another Final.

Derry are struggling, anchored firmly to the bottom of the table, and leaking scores heavily.

Offaly, relegated last year from Division 3, have made a solid start and are unbeaten from two games, having drawn one and won the other.

The Faithful County will be in no mood to be charitable and while Derry have home advantage, it could be another long afternoon for them.